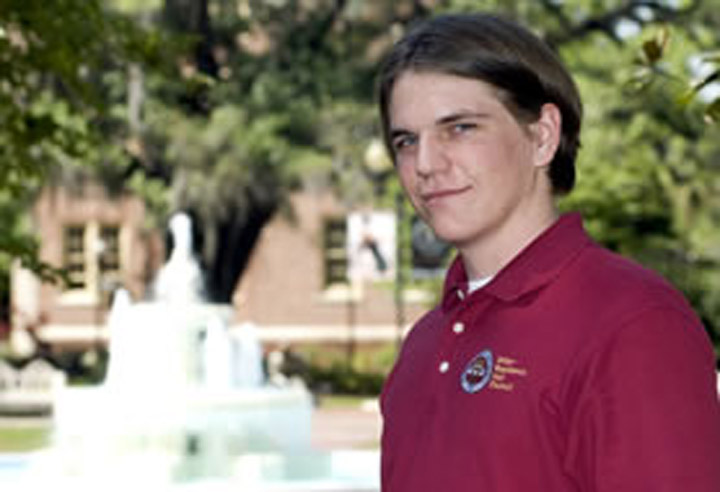 “Florida State's campus feels like a home. It's as though the students live in a giant living room.”

“Florida State’s campus feels like a home,” says Aaron Hood. “It’s as though the students live in a giant living room. With the closeness of the buildings, our separate colleges rub elbows when classes let out and everyone is trying to get a bite to eat before the next class.”

It is this atmosphere that Aaron, as director of the Inter-Residence Hall Council (IRHC) attempts to create for all students who live on campus. “As an agency of the Student Government Association (SGA), we present residence students’ issues to the Student Senate and to members of the Housing administration.”

In his freshman year, Aaron was the floor representative of Dorman Hall, a position in which he helped “plan programs to make our campus the home that everyone strives to find.” He then became vice president of Dorman Hall’s government and served on the IRHC’s Board of Directors. In April 2006, he was elected assistant director of the IRHC, and in December 2006 he took on the role of director, a position in which he represents more than 6,000 students.

He has been instrumental in changing the image of IRHC and its relationship with the SGA. In the past few years, since Aaron’s participation, the IRHC has begun to offer quality programs, including leadership development. In March, the IRHC held a conference at which students “worked on their leadership style, group dynamics, and creation of their own destiny.” Not wanting to take full credit, Aaron says that the program could not have been possible without the generosity of the SGA, “which is always looking for ways to get the student body more involved.”

Because of his efforts, Aaron was also recently inducted into the National Residence Hall Honorary, an award that is only granted to the top 1% of residential students.

Aaron is now hard at work planning for the upcoming academic year. Appropriately, he’ll start the new year with the motto—”Welcome Home.”