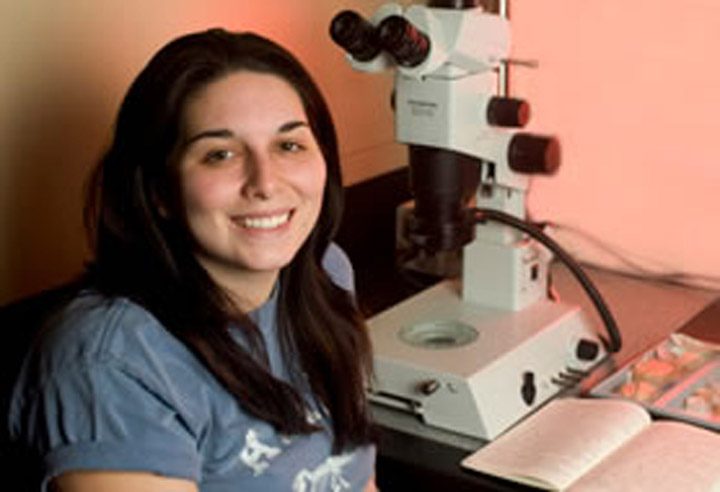 “I just don't pay attention to all that. Science is science, and the more people want to divide it into a gender contest, the less science is getting done.”

From the time she was 12 years old, Bonnie Garcia knew she wanted to be a paleontologist.

As for studying at Florida State, it was clear, after spending several hours in talks with various faculty members in the Geology department that “they really cared about their students. I actually feel like they want to know me, which is incredibly comforting.”

One of the professors she met was Dr. Gregory Erickson. She knew immediately she wanted to work with him. Indeed, he is now directing her “very exciting” Honors in the Major thesis on dinosaur histology. Bonnie explains, “Dinosaurs accumulate growth lines for every year they are alive. I am reconstructing the growth curve and life history of the Velociraptor.” She plans to present a poster of the project, tentatively titled “Longevity and Growth Patterns in the Dromaeosaurid Velociraptor Mongoliensis Inferred from Long Bone Histology,” at the next Society of Vertebrate Paleontology meeting in October.

A National Hispanic Scholar, Bonnie is also serving as the current president of the FSU Geological Society. “We were essentially defunct for a year,” she says. “My task, and that of the executive committee’s, is to oversee our rebirth. We’re hoping to get everything in order so that next year we can hold a mineral sale, with the proceeds going to the Society.”

Vertebrate Paleontology, Bonnie’s particular interest, is the study of extinct organisms that have a backbone. Discovering more about their behavior, appearance, and life history will add to the evolutionary timeline of the earth; that is, connecting extinct organisms with their relatives still existing today.

With her doctorate in hand, Bonnie hopes to gain a position as a curator at an “amazing museum like the Field Museum in Chicago, or the American Museum of Natural History in New York City.” Such a position would be, she says, “the most fun you could have, because you could work on incredibly interesting research in the field or the lab, and you could teach young kids about dinosaurs. I think it’s really important to get them as excited as I am about the subject and science in general.”

Of her knowing early on that she wanted to become a paleontologist, Bonnie says, “I suppose it is odd, as well as being a woman in this field, but I just don’t pay attention to all that. Science is science, and the more people want to divide it into a gender contest, the less science is getting done.”