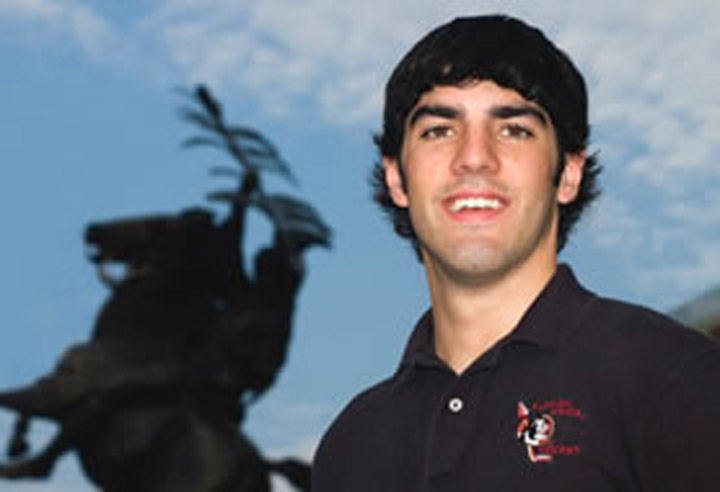 “Becoming a member of a student organization was one of the best experiences I have had, and being the supervisor of Sport Clubs has given me the opportunity to impact more students and group organizations than most FSU students.”

“I’ve been told numerous times not to say it, but I LOVE SPORTS!” says Craig Leduc, who, not surprisingly, is majoring in Sport Management. His favorite sport, however, is ice hockey, which he started to play at age three. Yes, he’s from up North—cold, snowy Providence, Rhode Island.

When a senior in high school, “Prov,” as he’s now called, learned about the high percentage of Americans who hate their jobs, yet stay in them. He says, “That’s when I realized that if my life did not revolve around sports, I would not be happy.”

Looking for an undergraduate Sport Management program, he discovered “Florida State’s was among the top ten programs in the nation.” He’s pleased he came down to our hot, humid climate, although the nearest ice skating rink is in Jacksonville. “It has been my best choice. I wanted to meet different people, learn about their cultures, and mature independently, away from home.”

Despite the Club’s location, which creates numerous obstacles, Prov’s leadership has helped it to prosper. “We condition off the ice, since Tallahassee has none. You must have technical and tactical skills to play the game, but at our level, it comes down to who has worked the hardest off the ice. If the strength is equal, then it’s all about heart.”

Funding comes from the University, member dues, donations from parents, and one “very special booster, who not only donates his own money, but also gets his business friends involved.” Traveling to games “does get crazy,” he says, “but out-of-state students like myself get a chance to see more of Florida and the Southeast.”

Academically, Prov is doing well (Dean’s List), and somehow finds the time to serve as supervisor of Campus Recreation’s Sports Club program. “It’s the perfect student job, with a very flexible schedule. Weeknights I supervise club teams’ practices, which are more competitive than intramurals, but less demanding than varsity sports. And at home events, I enforce rules if spectators get out of control.”

After graduation, Prov will move back to the cold, snowy North, where he hopes to work for a sports council or professional hockey team. He’ll take with him an appreciation for groups “that have to strive for attention. Becoming a member of a student organization was one of the best experiences I have had, and being the supervisor of Sport Clubs has given me the opportunity to impact more students and organizations than most FSU students.”