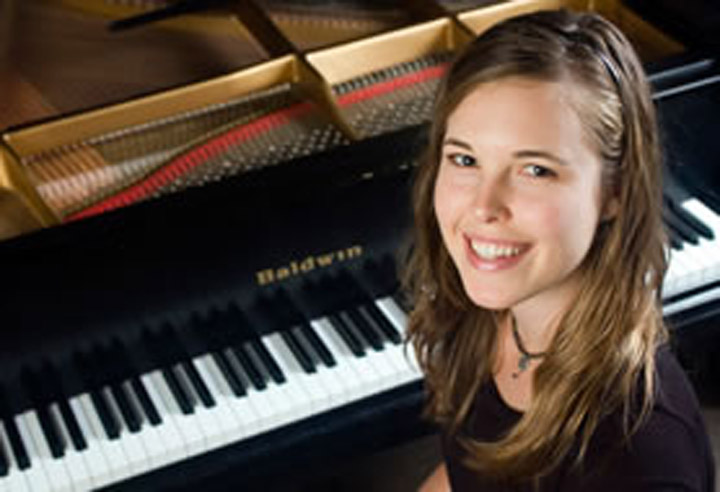 “Playing the piano is like being in a relationship," says Julia Wilcox. "I put it on the same level as I do with God, family, and friends. I can be who I am without having to make excuses.”

“Playing the piano is like being in a relationship,” says Julia Wilcox. “I put it on the same level as I do with God, family, and friends. I can be who I am without having to make excuses.”

Creating music, and attending Florida State, is a “family legacy.” Julia’s grandfather received his doctorate in Music and her father received his bachelor’s in Violin Performance. She can remember her mother playing the cello as far back as memory will take her.

Music is in her genes. “It’s one of the most fulfilling things I can imagine,” she says. “The more I dedicate myself to it, the more it gives in return.” Julia has dedicated herself to both her studies and to her performance. Academically, she has maintained a 4.0 College of Music GPA, appeared on the President’s List nearly every semester of attendance, and has been inducted into the Phi Kappa Phi Honor Society.

The College of Music recently recognized her with its Brautlecht Scholarship, which is given to seniors who have excelled academically and who show outstanding promise for success in the Music profession. She says, “It is quite an honor to be called a promising musician; it will motivate me to keep improving.” The idea that she will never completely master her music, that she will always be learning, pleases Julia.

She believes she owes this pursuit of excellence to her listeners—”When I am playing, I feel I am connecting with the audience.” And she is connecting to the creator of the music—”an actual person who was going through any range of emotion, from depression to euphoria. The composer puts himself on the page, and I have the opportunity to get inside him, decipher what he was going through, and then present it to my audience. That is thrilling.”

In the summer of 2005, Julia chose to study in Valencia, Spain, through Florida State’s International Programs. “Because I can speak Spanish better than any other foreign language.” She had an opportunity to explore “somewhere different than the U.S.” and in the process discovered “people who value different things than we do.”

Now that she has been bitten, she wants to continue traveling. “I find myself alone, practicing, a lot of the time, completely absorbed in the culture of Music. This is necessary to be successful, but I fear if I don’t do something else, I will stop improving. Great technique can only take you so far; sometimes you must do something completely separate to help you understand yourself better. Then, you can put more of your true self into the music, and can make a better connection to the world.”