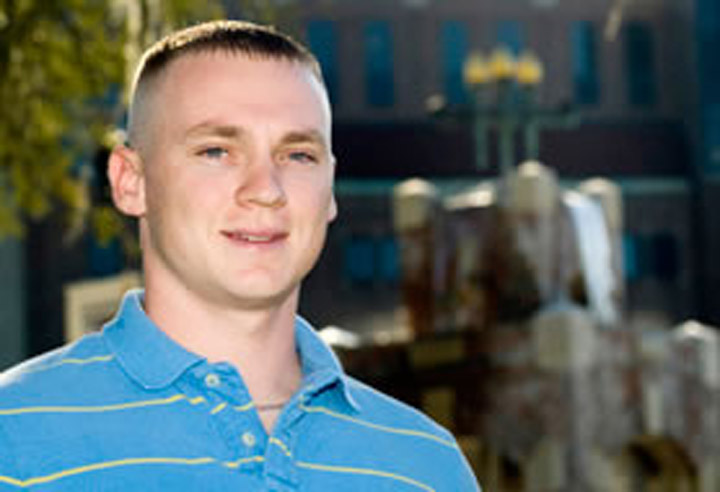 “I've seen a lot of danger," says Benjamin Cerniglia of his 7-plus years in the Marine Corps, "but I have the courage to see more.”

“I’ve seen a lot of danger,” says Benjamin Cerniglia of his 7-plus years in the Marine Corps, “but I have the courage to see more.” As an active duty Marine and as part of the Florida A&M Naval ROTC Program, which also serves Florida State and Tallahassee Community College, Benjamin has been stationed here in order to complete his dual degrees in Finance and Economics.

The ROTC program allows him to pursue any four-year degree of his choosing. Benjamin chose Business, “because of its versatility.” But soon discovered he “really enjoyed the world of Finance.” With “extra space for credits,” he took Economics courses and found another interest, and another degree to pursue. He says, “I like learning how the markets operate, and studying consumer behavior, and monetary and fiscal policy.”

Since both of his parents received their undergraduate education at Florida State (his father, Psychology; his mother, English), Benjamin, from the day of his birth, was a ‘Nole. Academic achievement, then, was expected. And he has not disappointed. Benjamin has appeared on both the Dean’s and President’s lists and has been inducted into two honor societies—Golden Key International and Beta Gamma Sigma International Business. The Navy ROTC Program has also honored him with its Academic Excellence Award.

Upon graduation, Benjamin will receive a commission in the Marine Corps and begin pilot training. He says, “It will be a fun way to serve my country, and I would be honored to fill that critical role, as a vital part of the U.S. mission. The danger doesn’t bother me that much.” Danger, to Benjamin, is crossing the street at a busy, traffic-filled intersection. Which, viewed from the blue sky above, would look scary.

Nevertheless, we wish this brave young man well, and hope he accepts our thanks for his service on our behalf.