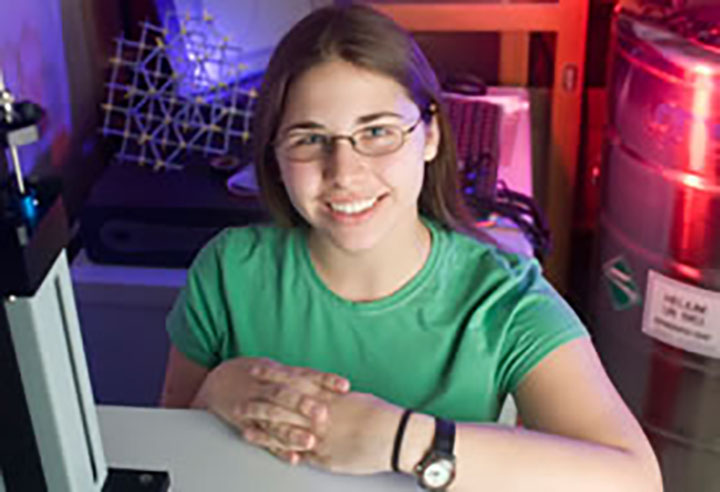 “It's important to inspire scientific curiosity early and to show kids that science and math are not as scary as they might think.”

“Nanotechnology is a whole new world,” exclaims Vannah Rahn. “Everything changes when you get that small. We are just beginning to understand how things work on that scale.”

Vannah is performing nanotechnology research under the tutelage of Dr. Geoffrey Strouse. She explains, “We hope that by changing the concentration of iron dopant in a gallium oxide nanocrystal we can change the properties of that crystal. This research could lead to a potentially useful material for electronic devices.”

First, she presented a poster on the tuneability of the magnetic properties of iron doped gallium oxide nanoparticles. With the help of Dr. Strouse and Donny Magana, Vannah made and analyzed all of the samples using X-ray diffraction and Superconducting Quantum Interference. In April, she presented her research at the Materials Research Society Conference in San Francisco. She’s now working on a publication of this work.

Nanotechnology is clearly Vannah’s passion. She has had the good fortunate to garner both a Herron Scholarship and a National Merit Scholarship, which have enabled her to study her passion. She plans to continue this research long after graduation, and at the same time Vannah will teach science to children. “It’s important to inspire scientific curiosity early and to show kids that science and math are not as scary as they might think. This attitude can help make certain the next generation remains economically competitive while enjoying the benefits of technological progress.”