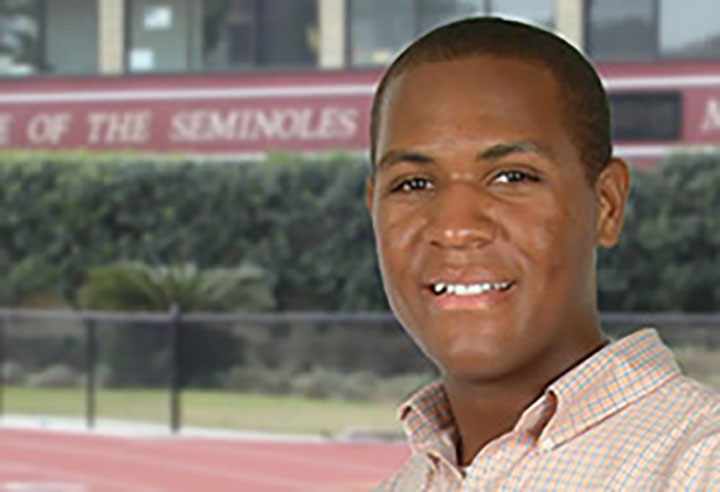 Community
Johnson works as a legislative assistant in Florida Governor Jeb Bush’s office. On a daily basis, he researches questions posed by constituents and serves on several committees including the Governor’s Haiti Advisory Council. Since 2004, he has worked in the capacity as the assistant to the director of Bush’s Haiti Advisory Group, created to compile recommendations to improve the current economic and environmental conditions in the country. Other projects include volunteering as a member of the Intergovernmental Relations Team during the hurricane emergencies in 2004, staff support at the Florida State Emergency Operations Center and as a campaign worker on the Bush/Cheney 2004 Presidential Re-election Campaign.

Within the athletics department, he spent the 2004-05 campaign as the vice-chair of the Atlantic Coast Conference Student Athlete Advisory Council, president of the Student-Athlete Advisory Council and vice president of Student Seminole Boosters. He volunteered with FSU Cares and the FSU Cross Country. In 2004, Johnson represented Florida State at the annual NCAA Leadership Conference in Orlando, Florida.

Sport
Johnson helped Florida State sweep the Atlantic Coast Conference Indoor and Outdoor Track and Field Team Championships, scoring points with runner up finishes in the shot put in February and the shot put and discus in April. His throw of 66’8.75” (20.34m) bettered the FSU Indoor school record and was the second farthest throw in the world at the time. He earned his first All-American honor with a fifth place finish in the shot put at the NCAA Indoor Track and Field Championship. The mark helped score points towards FSU’s highest team finish in 31 years. He moved into first on FSU’s all–time shot put list with a throw of 66’0.75” (20.13m) at the Seminole Twilight. The mark is the third farthest in the nation and broke the Mike Long Track and Field Complex record.