Florida State University President Eric J. Barron and his wife, Molly, joined friends, family and members of the U.S. military service on Sept. 21 to honor Army 2nd Lt. Justin Sisson, a 2012 graduate of the FSU Army ROTC program who was killed while on active duty in Afghanistan.

During the emotional ceremony Sisson’s parents presented $25,000 to the ROTC program to start a foundation that will award money to exemplary cadets each year. They also unveiled a portrait of Sisson that will hang in the Florida State ROTC building.

Joshua Peters, a former roommate of the fallen soldier, said Sisson was a role model, friend and dedicated soldier who was quick to take him and others under his wing.

“I hope people remember him for the courageous and exemplary person that he was,” Peters said. “The way he strived for excellence and his unyielding desire to help people live in others’ memories.”

Sisson, 23, was part of the 1st Battalion, 506th Infantry Regiment, 4th Brigade Combat Team, 101st Airborne Division (Air Assault) of Fort Campbell, Ky. Along with another soldier from his unit, Sisson was killed June 3 when a suicide bomber’s vehicle exploded near them.

During Sisson’s time as a student, he volunteered to be deployed to Iraq and later came back to finish his degree. Lieutenant Colonel Clinton D. Alexander said this is just one act of selflessness that lives in Sisson’s legacy.

“As we go forward, we all leave something behind,” Alexander said. “In Justin’s case, he left behind a legacy of friends, fun, hard work, determination, scholarship and leadership. He went forward but left something better in his wake.” 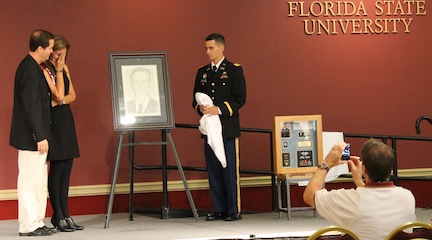 Justin Sisson's parents Kevin and Phyllis, at left, react to a portrait of their son during a ceremony in his honor. A classmate of Sisson's, Army 2nd Lt. Ryan Guthrie, is at right.