A novel magnet half the size of a cardboard toilet tissue roll usurped the title of “world’s strongest magnetic field” from the metal titan that had held it for two decades at the Florida State University-headquartered National High Magnetic Field Laboratory.

And, its makers say, we ain’t seen nothing yet: By packing an exceptionally high-field magnet into a coil you could pack in a purse, MagLab scientists and engineers have shown a way to build and use electromagnets that are stronger, smaller and more versatile than ever before.

Their work is outlined in an article published today in the journal Nature.

“We are really opening a new door,” said MagLab engineer Seungyong Hahn, the mastermind behind the new magnet and an associate professor at the FAMU-FSU College of Engineering. “This technology has a very good potential to entirely change the horizons of high-field applications because of its compact nature.”

“This is indeed a miniaturization milestone that could potentially do for magnets what silicon has done for electronics,” he said. “This creative technology could lead to small magnets that do big jobs in places like particle detectors, nuclear fusion reactors and diagnostic tools in medicine.”

Gary Ostrander, vice president for Research at Florida State University, said the new record is a tribute to the ingenuity of the faculty and interdisciplinary nature of research at the lab.

“Our researchers have engineered a remarkable feat here,” he said. “This technology really shows how the strength of our faculty combined with the resources of the lab can result in something special.”

The miniature magnet created by Hahn and his team generated a world-record 45.5 tesla magnetic field. A typical hospital MRI magnet is about 2 or 3 teslas, and the strongest, continuous-field magnet in the world is the MagLab’s own 45-tesla hybrid instrument, a 35-ton behemoth that has maintained that record since 1999.

The 45-T, as it is called, is still the world’s strongest working magnet, enabling cutting-edge physics research into materials. But in a test, the half-pint-sized magnet invented by Hahn, tipping the scales at 390 grams (0.86 pounds), briefly surpassed the reigning champ’s field by half a tesla, a compelling proof of concept.

How could something so small create a field that big? By using a promising, new conductor and a novel magnet design.

Both the 45-T magnet and the 45.5-T test magnet are built in part with superconductors, a class of conductors boasting special properties, including the ability to carry electricity with perfect efficiency.

The superconductors used in the 45-T are niobium-based alloys, which have been around for decades. But in the 45.5-T proof-of-principle magnet, Hahn’s team used a newer compound called REBCO (rare earth barium copper oxide) with many advantages over conventional superconductors.

Notably, REBCO can carry more than twice as much current as a same-sized section of niobium-based superconductor. This current density is crucial: After all, the electricity running through an electromagnet generates its field, so the more you can cram in, the stronger the field. 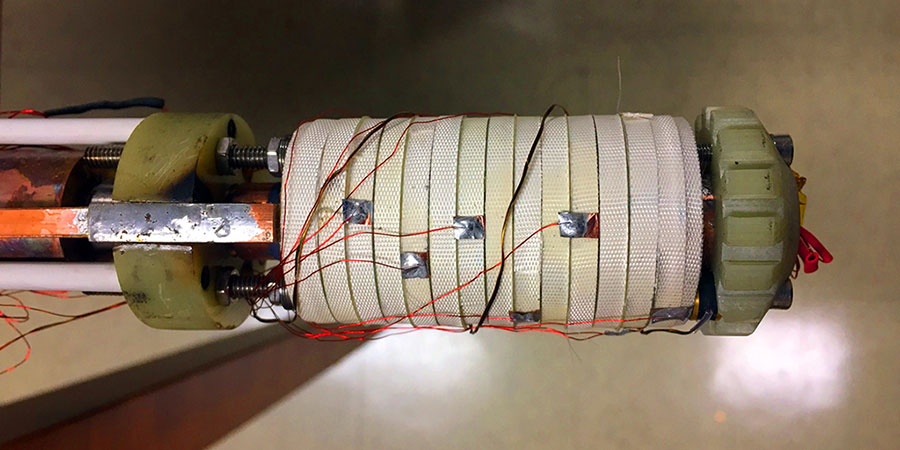 MagLab Chief Materials Scientist David Larbalestier, who is also a professor at the FAMU-FSU College of Engineering, saw the product’s promise to pack more power into a potential world-record magnet, and encouraged Hahn to give it a go.

Today’s electromagnets contain insulation between conducting layers, which directs the current along the most efficient path. But it also adds weight and bulk.

Hahn’s innovation: A superconducting magnet without insulation. In addition to yielding a sleeker instrument, this design protects the magnet from a malfunction known as a quench. Quenches can occur when damage or imperfections in the conductor block the current from its designated path, causing the material to heat up and lose its superconducting properties. But if there is no insulation, that current simply follows a different path, averting a quench.

“The fact that the turns of the coil are not insulated from each other means that they can share current very easily and effectively in order to bypass any of these obstacles,” explained Larbalestier, corresponding author on the Nature paper.

There’s another slimming aspect of Hahn’s design that relates to quenches: Superconducting wires and tapes must incorporate some copper to help dissipate heat from potential hot spots. His “no-insulation” coil, featuring tapes a mere 0.043-mm thick, requires much less copper than do conventional magnets.

With the guidance of veteran MagLab engineer Iain Dixon, the team built three increasingly powerful prototypes in quick succession that became known as the Little Big Coil (LBC) series. Along the way, they refined, solved problems and used ever-better superconductors.

The search for answers took the team to the cutting edge of technology — quite literally.

Due to production constraints, REBCO tapes are manufactured at a specific width —12 mm, or about half an inch. To meet the LBC’s requirements, however, those tapes had to be cut lengthwise to 4 mm wide.

That’s difficult to do, even with the greatest care, because REBCO is quite brittle. As a result, the sides of the tape that had been slit were vulnerable to cracking under the mechanical stress of high magnetic fields.

“That was discovered beautifully in these experiments,” Larbalestier said. “We found a way to control this damage, which is to insist that we buy material that has one non-slit edge, and we orient the non-slit edge away from the center of the magnet. And under these circumstances, so far we are not seeing damage.”

The next step? More research and trouble-shooting. Hahn’s LBC design is currently being considered for use in a potentially record-busting future superconducting magnet that is now in research and development funded by the National Science Foundation.

“The fundamental problem of REBCO is that it’s a single-filament conductor that cannot be made perfectly,” Larbalestier said. “So any length of conductor contains a variety of defects whose impact on any future magnet is not yet well understood. But we relish these sorts of challenges.”

Even with these challenges, scientists are still thrilled with the progress that has been made.

“When NSF first launched the National High Magnetic Field Laboratory decades ago, it revolutionized the use of powerful magnets for research,” said Linda Sapochak, director of NSF’s Division of Materials Research. “In announcing their new world-record-breaking magnet, the MagLab has shown it continues to drive the cutting edge of this field, and the breakthroughs that will follow.”

“This breakthrough will accelerate the MagLab’s NSF-supported effort to develop energy efficient, high-field magnets, which when realized could democratize national access to this technology,” he said.

The LBC project is a collaboration of the MagLab’s Applied Superconductivity Center, its Magnet Science and Technology division and Seoul National University. In addition to Hahn, Larbalestier and Dixon, the paper’s authors were: doctoral student Kabindra Bhattarai, postdoctoral researchers Kwanglok Kim, Kwangmin Kim and Xinbo Hu; MagLab scientists Thomas Painter and Jan Jaroszynski; and Seokho Kim and So Noguchi, both visiting scientists at the MagLab.