Using a genetic mapping technique developed at Florida State University, FSU and Cornell University researchers have shown that a small percentage of the entire maize genome is responsible for almost half of a plant’s trait diversity.

Hank Bass, associate professor of biological science at FSU, and Daniel Vera, director of the FSU Center for Genomics and Personalized Medicine, combined their expertise in maize genome mapping with the statistical genomics expertise of colleagues at Cornell University, Eli Rodgers-Melnick and Ed Buckler. Together they found that a small portion of chromatin — the complex of DNA and its associated proteins — accounts for 40 percent of heritable trait diversity in maize.

That means a small portion of the chromatin holds a vast amount of information that accounts for traits such as plant size, shape, yield and stress response.

“What blew me away about this work is how informative this chromatin profiling technique is at mapping the functionally important part of the maize genome,” Bass said.

The research is published in the May 16 issue of the Proceedings of the National Academy of Sciences.

Identifying this part of the genome greatly narrows the area that is examined for maize breeding and genomic editing, which may greatly accelerate the pace for crop improvement. This means growers might be able to more quickly target areas of the genome that could help them develop crops that are more drought resistant or durable in adverse environments.

“It allows us to start pinpointing the single base pair changes [small mutations] that are regulating or allowing plants to adapt to their environment,” Buckler said. “It helps us narrow down the hunt dramatically.”

Maize is considered a model species for scientific research because it has exceptional genetic diversity and resources, underwriting decades of breakthrough research in mechanisms of heredity.

This new study helps explain how an organism can express different genes in different cell types despite the fact the DNA must be compacted to nearly 1 millionth its length to fit inside the cell nucleus. Even when compacted, there still exists areas called open chromatin that coordinate complex patterns of gene regulation.

Researchers wanted to better understand what was happening in this space of open chromatin.

The study represents the first application of the chromatin profiling technique that Vera and Bass developed as part of an NSF-funded project at Florida State University.

For this, Cornell sent 600 kernels to FSU where Bass and Vera grew them into seedlings, collected tissue from the roots, stems and leaves, and then isolated the cell nuclei. The nuclei were exposed to an enzyme that cuts specific portions of the DNA, and the data were computationally and statistically analyzed to identify the open chromatin in the genome. 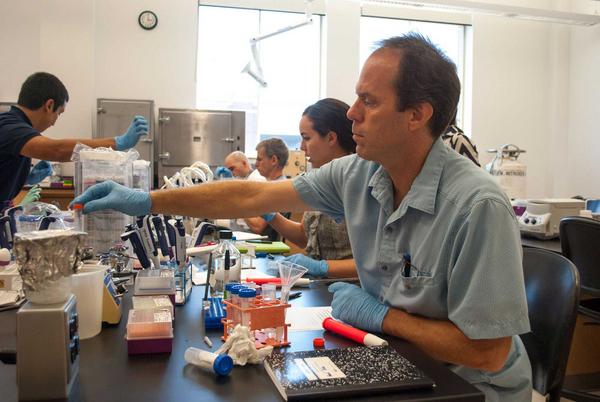 Hank Bass and colleagues teach a seminar on the chromatin profiling technique.

“It’s like finding a light switch on the wall,” Bass said. “The chromatin profiling shows you which parts of the genome are genetic switches.”

This research was supported by the National Science Foundation Plant Genome Research Program and the USDA.