“We started writing this plan over a year ago and presented it last year, winning second place,” said CVA President Abby Kinch, a second-year doctoral student in Florida State’s Askew School of Public Administration and Policy. She co-wrote the business plan with CVA member and Veterans Student Union Director Andrew Sloan, a Master of Business Administration student in the university’s College of Business

“We restructured it this year, focusing more on immediate goals that will directly affect student-veterans and the programs we have at FSU,” she said.

The CVA’s business plan outlined its offerings for student-veterans aimed at supporting the four-phase life cycle of a student-veteran: transition into college, retention, graduation and employment after college.

The plan outlined the CVA’s accomplishments on the behalf of student-veterans over the past year, including the successful lobbying for separate pieces of state legislation. One piece allows student-veterans from any state to receive in-state tuition at Florida public universities and the other, the Honorably Discharged Veteran Graduate Assistance Program (HDVGAP), makes up for shortfalls in GI Bill of Rights housing stipends that student-veterans experience during holiday breaks. 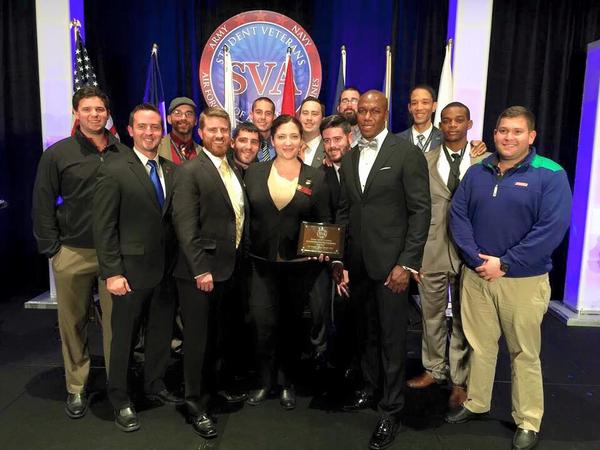 The plan also included long- and short-term goals, such as gaining measurable data for impact analyses. In addition, it detailed an expansion of the TCC2FSU program, which provides a pipeline of student-veterans from Tallahassee Community College. The program now includes other two-year schools and procedures to make the transition of incoming FSU students more successful.

Sloan characterized the experience of developing a business plan as a great way to showcase the “amazing things” FSU’s student-veterans have accomplished over the past five years with the support of the administration, faculty and student body.

“We shined as an example of what can be accomplished for student-vets at schools around the nation and sparked hours of discussion with fellow student-vet organizations about what they could do to achieve similar goals,” Sloan said.

Each year, Student Veterans of America hosts numerous workshops and summits to cultivate leadership within its more than 1,100 chapters by encouraging the creation of business plans, which help define chapter missions and goals and how to accomplish those goals. This work culminates in the Business Plan Competition at the national conference held each January.

More than 50 chapters entered this year’s Business Plan Competition by submitting a plan, a budget, a short video and other documents to Student Veterans of America and the Military Family Research Institute housed at Purdue University. Those were narrowed to six chapters, the representatives of which made presentations to a panel of eight judges from corporations such as Bank of America, Google, Prudential, Raytheon and General Dynamics. The top two — Florida State University and Spokane Community College — were then chosen to make a presentation to the 1,200 conference attendees and other guests that included U.S. Secretary of Veterans Affairs Robert McDonald.

During the presentation by Spokane Community College, its student-veterans announced their intention to develop a bridge program to a neighboring four-year institution, similar to the TCC2FSU program. In response, Kinch and Sloan, on behalf of FSU’s student-veterans, donated the monetary portion of their first prize to Spokane Community College to get the process started, with the condition that they seek the CVA’s help during the process.

“Andrew and I both went to Tallahassee Community College before coming to FSU, so we understand that many student-veterans use a community college as a stepping stone to a four-year school,” Kinch said.

Military service members have a tradition, according to Sloan, of supporting each other in the field by sharing meals and gear. By donating the monetary portion of their prize, Kinch and Sloan carried the practice into civilian life.

“It is time for us to share the resources of knowledge, experience and funding whenever possible,” he said. “Just as it was in the service, so should it be in our journey through higher education.”