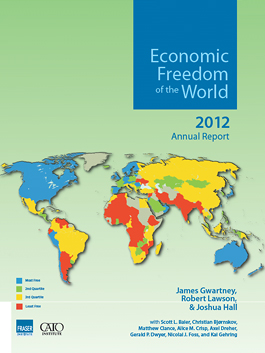 The United States, long considered a champion of economic freedom, plunged to No. 18 in new rankings published in the 2012 Economic Freedom of the World, an annual report co-authored by Florida State University economics Professor James Gwartney.

The report is published by Canada’s Fraser Institute in cooperation with institutes in 78 other nations and territories. The U.S. publisher is the Cato Institute. The 2012 report, released on Sept. 18, uses 42 different variables derived from sources such as the World Bank and International Monetary Fund to measure the degree to which the institutions and policies of 144 countries are consistent with economic freedom.

“The report indicates that the U.S. is on the wrong track,” Gwartney said. “Freer economies grow more rapidly and achieve higher income levels. Now, for more than a decade, the United States has been expanding the size of government, increasing both debt and regulation, and using subsidies, grants, tax breaks and mandates to centrally plan large sectors of the economy. A system of crony capitalism has emerged. The declining economic freedom rating of the United States provides confirmation of this trend.”

The cornerstones of economic freedom are personal choice, voluntary exchange, freedom to compete, and security of private property, according to Gwartney, who has served as an author of the report since its inception in 1996. Gwartney’s co-authors this year are Robert A. Lawson of Southern Methodist University and Joshua Hall of Beloit College.

To determine the rankings, the authors used an index that measures the degree to which countries rely on rule of law and markets rather than political decision-making to allocate resources. The current ratings and rankings are based on data through year-end 2010.

Hong Kong once again topped the rankings of the 144 countries, followed by Singapore, New Zealand and Switzerland. Australia and Canada were tied for fifth.

From 1980 to 2000, the U.S. ranking was third, behind only Hong Kong and Singapore. However, since 2000, the U.S. ranking has slid steadily downward to eighth in 2005, 10th in 2008, and now 18th in 2010. The economic freedom score of the United States now falls below Finland and Denmark, two European welfare states. The United States also trails Mauritius, Chile, Bahrain, the United Arab Emirates, Estonia, Taiwan and Qatar.

The summary ratings of countries range from a low of approximately 3.0 to a high of near 9.0. The U.S. rating has fallen from 8.65 in 2000 to 7.70 in 2010. This approximate 1-point decline may not sound like much, but the report argues that a 1-point change in a country’s rating is associated with between a 1- and a 1.5-percentage-point decline in long-term economic growth.

“This sluggish growth will be the new norm unless we move away from the policies that are undermining economic freedom,” Gwartney said.

Venezuela has the lowest level of economic freedom among the 144 countries for which data are available. Myanmar, Zimbabwe, Republic of Congo and Angola round out the bottom five nations.

In addition to the country summary rating, the study also measures economic freedom in five areas: (1) size of government, (2) legal structure and security of property rights, (3) access to sound money, (4) freedom to trade internationally, and (5) regulation of credit, labor and business.

The full 2012 report and data from previous annual reports are available at www.freetheworld.com.