For the next few weeks, members of the Florida State University community don’t have to go too far to experience a little Disney magic.

Thanks to Mery-et Lescher, a doctoral candidate in FSU’s Department of Art History, students, faculty and staff can enjoy an exhibit dedicated to the art and artifacts of Disney’s animated films at the William-Johnston Building art gallery. The exhibit features items from the Disney Renaissance, which spans from the release of “The Little Mermaid” in 1989 through the release of “Tarzan” in 1999.

“The Disney Renaissance was really the last hurrah of hand-drawn animation,” Lescher said. “Hand-drawn is not dead — not by any means, but I don’t want us to lose sight of the legacy. This is an important period in animation, and I feel that it needs to be documented and that’s what I’m here to do.”

The exhibit, “Collectibility: Art and Commodity in the Disney Renaissance” is a look at the research for Lescher’s thesis on Disney’s feature animation studio in Florida.

Lescher created the exhibit in association with Professor of Art History Robert Neumann so students taking his class “Disney in the American Century” could gain a better appreciation of the art and artifacts of animated films.

Lescher — a lifelong lover of all things Disney — decided she wanted to work for the company at nine years old. After studying animation at the School of Visual Arts in New York City, Lescher worked more than 15 years with Disney’s animation studios in Orlando and Australia, where she collected the items lining the walls and glass cabinets on display at the exhibit. 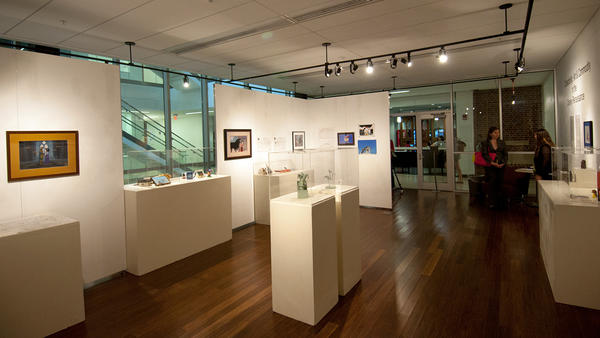 The exhibit features items from films like “The Little Mermaid,” “Beauty and the Beast,” “Aladdin” and “Mulan,” and its purpose is to fuel the ongoing discussion about the term “collectibility” as it refers to animation art. The objects range from those identifiable as “art” and those that can best be termed “artifacts.”

Art constitutes an image that in some capacity contributes toward the final frame of an animated film — in this case, features from Disney movies. There are examples from various facets of the production pipeline — layout, animation, effects, backgrounds and color models.

“The art is what actually contributes to the film, whether in drawings, in paintings, in cels (celluloids), or even the sculptures called maquettes,” Lescher said. “An artifact is what comes usually as a derivative of the film. These are the mass production pieces — the public consumption work like coffee mugs and T-shirts are artifacts.” 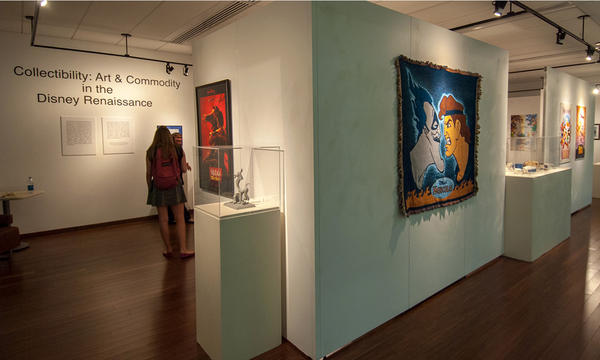 Part of Lescher’s goal for the exhibit was to show the animation process is art itself even though it is rarely seen compared to the artifact portion of the whole operation.

“Probably the ratio from art to artifact is 25 percent art and 75 percent artifacts,” Lescher said. “There is this big difference, and I wanted to put as much of the production art in here as I could that would show what goes on behind the scenes in actually making a film.”

After her career with Disney came to close, Lescher decided to return to school and pursue different passions — museum studies and art history. She studied medieval art to earn a Master’s in Art History from FSU, and now has combined her interests in Disney animation and art history for the focus of her doctoral thesis.

“Whether I’m talking about Disney, the art of animation, or talking about how to put together a museum exhibit, I think film deserves a place within the museum,” Lescher said. “This is another way of getting film into the museum and showing what it takes – the pieces of art that it takes to make these films. It is really nice to have this out and be able to share this with our students.”

The exhibition, which began Aug. 21, is open to the public through Oct. 1. Admission is free.