It’s been an exceptional year for the Florida State University band program — and its list of accomplishments and honors continues to get longer.

Between a halftime show-turned-viral hit and the Marching Chiefs’ first-ever appearance in the Rose Parade, the FSU band program has made its share of headlines in recent months.

But the program, which consists of seven different ensembles including the Marching Chiefs, doesn’t slow down just because its not football season. Whether it’s the pep band or university symphonic band or one of the many other groups, the FSU band program is always making beautiful music. Just last week, the Seminole Sound — the university’s pep band — supported the FSU women’s basketball team on its incredible journey to the NCAA Elite Eight.

“Florida State has always had a strong band program, but over the last year we have really had some spectacular accomplishments,” said Patrick Dunnigan, director of bands. “Now, the whole world is starting to take notice.”

Dunnigan began a two-year term as president of the CBDNA, and Richard Clary, FSU’s director of wind ensembles, assumed the role of president-elect.

“When you think of band schools, you think of Michigan and Indiana and Illinois —the Big Ten schools with all the history —but none of those places have produced four national presidents,” Dunnigan said.

“Going back a long way, the CBDNA has been a distinguished place for college bands,” Clary said. “This is at a level of comparison which I’m not sure has been equaled.”

In addition, the Florida State wind orchestra —conducted by Clary —was one of just eight university ensembles chosen to perform at the CBDNA national conference during the weekend. The group was chosen by a blind audition, and marked the second time a Clary-conducted ensemble performed at the prestigious, biennial musical event.

“The concert part of our program is the one that’s not in the public eye,” Clary said. “We have one of the best university wind orchestras on the planet, and it is a little bit of a secret.” 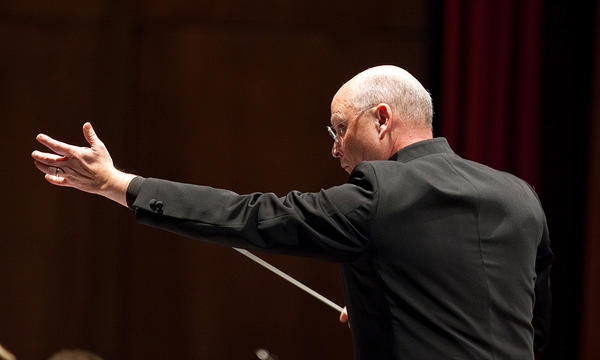 “One of the things the CBDNA has done the best is the promotion of artistry of the wind band genre through a series of commissions and working one-on-one with a variety of composers to produce a number of works over the years,” Dunnigan said.

As president, Dunnigan wants to continue cultivating young composers to produce works for concert bands as well as address the needs of smaller regional schools with limited budgets.

One of the CBDNA’s main objectives is to help athletic band directors find solutions to problems and create better ways to manage football games and halftime shows.

Dunnigan has plenty of experience in that particular area as he also serves as co-director of the Marching Chiefs —the most visible of FSU’s bands and one of the largest in the nation — along with David Plack, director of athletic bands.

“We get out there everyday for rehearsal and there are 420 kids who are there by choice,” Dunnigan said. “And we’ve probably turned away another 100 people during the audition process.”

People are surprised to learn the Marching Chiefs do not offer scholarships and that about 75 percent of members are non-music majors and represent virtually every academic discipline on campus.

And while the Marching Chiefs have always enjoyed popularity within the FSU community, they garnered some worldwide exposure over the last year.

Social media has given marching bands unprecedented publicity, especially since most football halftime performances stopped being televised in the mid-1980s.

“I think during that period of time bands faded from people’s minds a little bit because they weren’t seeing them on TV,” Dunnigan said. “Then, the Internet came along and schools were able to post their halftime shows on websites like YouTube, Twitter and Facebook. Fans are seeing a lot more stuff than they used to.”

Last fall, a Beyoncé tribute by the Marching Chiefs was a prime example of how social media has increased the bands’ visibility.

“Had it not been for social media, we would have done our Beyoncé tribute at home, fans would have applauded and that would have been the end of it,” Dunnigan said. “Thanks to the Internet, it took on a second life. After all that work there was life beyond the eight-minute halftime show. It got a lot of attention.”

But perhaps the most thrilling moment over the past year came on New Year’s Day when the Marching Chiefs made the cross-country trip to Pasadena, Calif., to march in one of the most famous parades in the country.

“For band people, there are a lot of parades in the world, but the two Super Bowls of parades are the Macy’s Thanksgiving Day Parade and the Rose Parade,” Dunnigan said. “To be in the Rose Parade was astonishing. I’ve never felt more welcomed at an event in my life.”

Across the board, the FSU band program enjoyed a memorable year, and fans should look forward to more highlights to come. There is still plenty of music to be made.