Mortal enemies in life, Adolph Hitler and Joseph Stalin are forever linked in death. Under their leadership, Hitler’s Nazi Germany and Stalin’s Communist Soviet Union engaged in a war of annihilation and genocide, introducing to the world a level of state-sanctioned barbarism that is unrivaled in human history.

A new book by Florida State University historian Robert Gellately shows how another murderous dictator of the early 20th century—one who, until now, has largely escaped the condemnation of history—was in fact the creator of many of the brutal methods later perfected by those who came after him. Vladimir Lenin, Stalin’s predecessor as head of the Soviet state, gets a critical new look in “Lenin, Stalin, and Hitler: The Age of Social Catastrophe.” The book has just been published by Alfred A. Knopf Inc.

“This book began as a study of the conflicting ideologies of Communism and Nazism and the murderous rivalries of Stalin and Hitler,” said Gellately, FSU’s Earl Ray Beck Professor of History. “I did not initially include Lenin as a major figure. However, as I conducted the research for the book and tried to reconstruct the events leading up to the Second World War, I began to see that much of what I wanted to say was leading me back, over and over, to Lenin and the beginnings of the Soviet dictatorship.”

In analyzing the 31-year period between 1914 and 1945, Gellately documents a time of almost continuous upheaval in which society was buffeted by two world wars, the Bolshevik Revolution, the Holocaust, and the rise and fall of the Third Reich. (Gellately refers to the period as the “Age of Catastrophe” for its ruinous effects on societies throughout the world.) Having availed himself of recently opened Russian and German archives in researching the book, the author also shows how these social and political catastrophes created the conditions that enabled Lenin, then Stalin and Hitler to pursue their utopian, if dreadfully flawed, ideals. 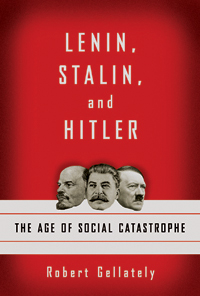 “Lenin, Stalin, and Hitler: The Age of Catastrophe” counters history’s traditional view of all three dictators—perhaps none more so than Lenin, who has long been viewed as a wise, even noble, revolutionary whose Marxist ideals were corrupted by his brutish successor, Stalin.

In fact, Lenin was “a heartless and ambitious individual who was self-righteous in claiming to know what was good for ‘humanity,’ brutal in his attempt to subject his own people to radical social transformation, and convinced he held the key to the eventual overthrow of global capitalism and the establishment of world Communism,” Gellately writes. Archival records make clear that Lenin was the most extreme of the Bolsheviks, the one who pressed for the use of terror as a political weapon as much as, and probably more than, any of his compatriots.

“To put it another way, Stalin initiated very little that Lenin had not already introduced or previewed,” Gellately writes. “Stalin was his logical successor, priding himself on being Lenin’s true disciple, though he was to transform the Soviet Union in ways his idol could only dream about.”

Gellately also shows that, for all of Hitler’s atrocities, he could not have done what he did without the consent of the German people.

“While the Soviet model called for a non-democratic, ‘avant garde’ dictatorship—that is, one led by highly educated, professional revolutionaries—Hitler’s power emerged in a ‘consensus dictatorship,'” Gellately said. “Rather than ruthlessly imposing his will on the populace, as Lenin and Stalin did, Hitler believed that the only way authority can work is if it’s popular. Thus, his crackdowns on perceived outsiders—homosexuals, Gypsies, Jews, criminal recidivists and welfare cases among them—were done with the tacit support of the German people.”

A comparative history, “Lenin, Stalin, and Hitler” shows how three charismatic but utterly amoral men from two dramatically different political systems were inextricably linked, and how these linkages led to some of the darkest episodes in human history.

Read more about the book by visiting www.randomhouse.com/knopf/catalog and searching for the book title.