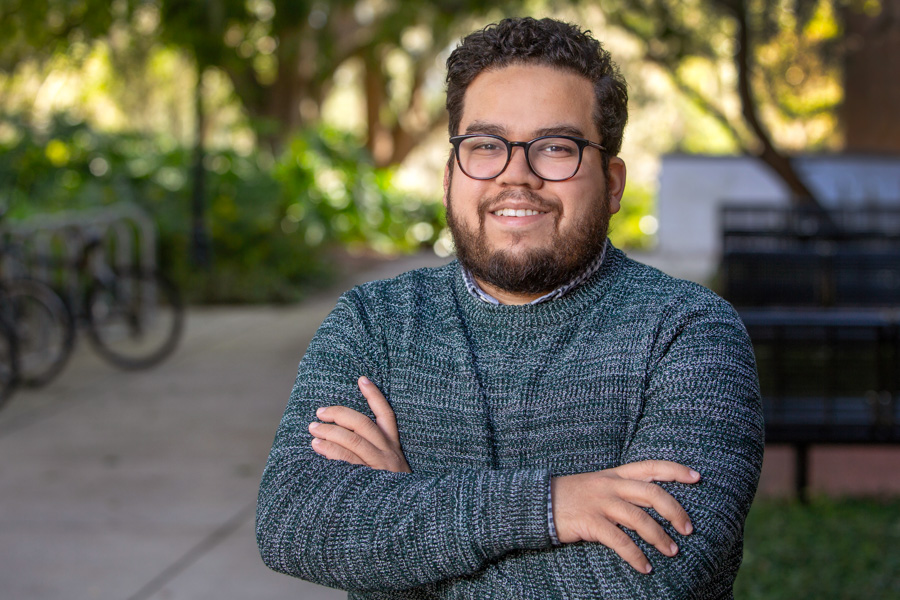 “I don’t know if I would be anywhere close to where I am now if it were not for FSU. I am very grateful for this school.”

Gomes first became aware of Florida State as an undergraduate in Brazil, and he immediately knew it was the place for him.

“When I was in my second year as an undergrad, two professors from FSU were doing a tour in Brazil,” said Gomes, who won FSU’s prestigious Research and Creativity Award from The Graduate School in the 2017-2018 school year. “One of them visited my university with a graduate student who was Brazilian, and they talked about FSU. I was interested, so I sent them an email to find out how I could have the same experience.”

With his sights set on attending Florida State for a doctorate, Gomes began to search for a way to make this dream possible. He realized that goal when he received a LASER Fellowship from FSU’s Department of Chemistry and Biochemistry.

The Latin American Student Education and Research (LASER) Fellowship is designed to strengthen connections between FSU and Latin American universities and create opportunities for educational research, and it provides a stipend for Latin American students to travel to the United States to work on research projects for two months.

His unique interest in the intersection of chemistry and computers opened the door to a new relationship between Florida State and IBM. When he reached out to IBM to apply for a research grant, that inquiry led to a productive collaboration with FSU.

“We started a project with IBM, and I also got the scholarship,” Gomes said. “That resulted in an opportunity for me to go to San Jose, California, and work with the company for a week. It was a great experience, and it also established a new line of communication between IBM and FSU that has continued.”

Gomes said the experience offered him a valuable opportunity to connect with other innovators.

He received another chance to work with visionary scholars when he was accepted to attend the 2017 Lindau Nobel Laureate Meetings in Germany. The event invites young scientists to spend a week in Germany to connect with Nobel Laureates.

“The Lindau Meeting has a long history,” Gomes said. “It was organized as a way to preserve peace and enhance communication between scientists. It was designed to bring Nobel Laureates closer to people just starting their careers in order to inspire them and foster exchange among scientists of different backgrounds. It was a very humbling experience.”

Those experiences elevated Gomes’ leadership skills and knowledge level, which proved helpful when he returned to FSU. He wanted to give back to the university community, so he started mentoring students as a teaching assistant and overseeing undergraduate research.

“Mentoring an interested student is very rewarding,” Gomes said. “It’s nice when they ask questions, and you can see the student developing through the semester and learning more.”

Gomes has received an array of awards for his research and innovation at Florida State, including honors from the American Chemical Society, Chemical Abstract Services and the International Union of Pure and Applied Chemistry.

“Gabriel’s accomplishments have been extraordinary,” said Igor Alabugin, the Cottrell Family Professor in the Department of Chemistry and Biochemistry. “In a little more than four years, Gabriel coauthored more than 30 manuscripts in top peer-reviewed journals and started collaborations with scientists at IBM, Japan, Australia, Germany, France, Russia, Mexico, Spain and Scotland. He genuinely enjoys the beauty and complexity of science. Gabriel does not stop until he fully understands problems and finds a way to solve them.”

In the future, Gomes hopes to continue teaching as he pursues other career goals. After graduation this fall, he plans to move to Canada, where he will work as a post-doctoral researcher at the University of Toronto developing autonomous laboratories and applying machine learning for materials discovery.

“We want to create autonomous labs that run on their own to accelerate discovery, and we have to figure out a way to develop materials faster,” Gomes said. “Discovering and understanding new chemical reactions is crucial for that to occur, and it’s what I want to do in my career. I also hope to establish my own independent research group and train the next generation of chemists.”

As Gomes prepares to begin a new chapter in his life, he recognizes the powerful impact Florida State’s had on him personally and academically.

“FSU and the chemistry department are very engaging and helpful,” Gomes said. “My major advisor Professor Alabugin, and other professors and collaborators have been pivotal for my career. I don’t know if I would be anywhere close to where I am now if it were not for FSU. I am very grateful for this school.”