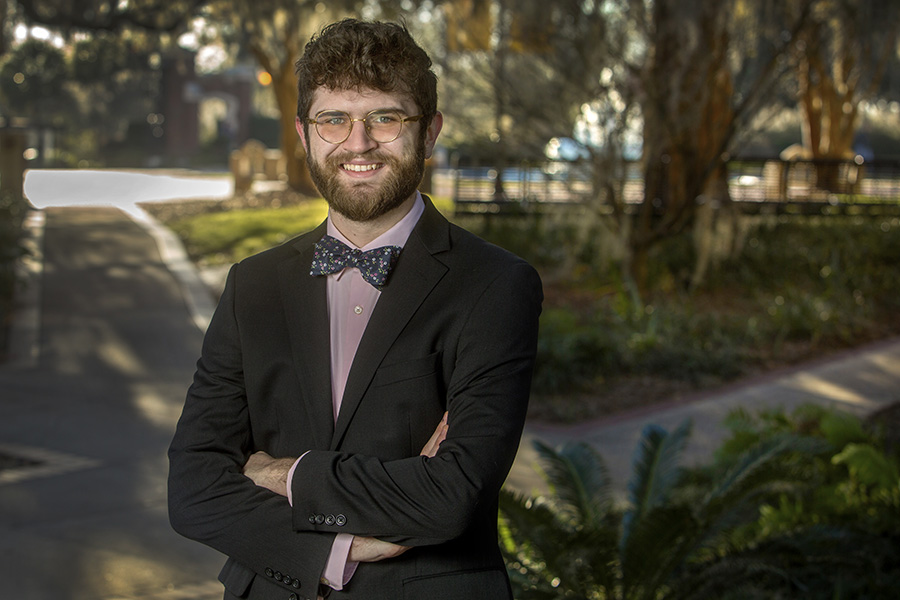 “My overall experience at FSU has been phenomenal, and I would not trade my time spent as a Marching Chief and chemical and biomedical engineer for anything.”

Senior Scott Boebinger has always been passionate about all things science, music and Florida State University. For the past three years, he has allowed all three to fully manifest during his exceptional collegiate experience.

From a young age, Boebinger had deep connections to Florida State. His brother and sister are both alumni and his father, Gregory Boebinger, is an FSU professor and director at the FSU-headquartered National High Magnetic Field Laboratory (MagLab).

Boebinger has distinct and fond memories of assisting his father in a public lecture on superconductivity at the MagLab, during which they levitated a disk of superconducting material over a track made of magnets.

“I have lived in Tallahassee for the past 13 years, so FSU has been involved in the vast majority of my life,” Boebinger said. “After seeing my siblings’ experiences at FSU, I knew it was the right place for me because of its combination of academic prowess and infectious spirit.”

As a senior in high school, Boebinger completed a research fellowship under Timothy Cross, a chemistry professor at FSU and facility director at the MagLab. They studied the structure of the M2 protein, which forms a tiny proton channel in the influenza virus. His work with Cross solidified his decision to major in chemical and biomedical engineering once he began studying at FSU.

Once he officially became a Seminole, the honor student began working in the lab of Samuel Grant, a biomedical engineering professor. His research in Grant’s lab focused on Alzheimer’s disease, the most common form of dementia that affects roughly 5.5 million people in the United States.

Boebinger worked with his lab partner, Tara Palin, to develop a technique to screen for Alzheimer’s before the development of symptoms. The project focused on testing an MRI technique called Diffusion Tensor Imaging (DTI) to determine its ability to diagnose Alzheimer’s disease.

“Prior to working in the lab, I had little direction as to which part of the human body I wanted to study,” Boebinger said. “My time spent researching Alzheimer’s has given me a profound interest in the brain and helped me develop my future goals.”

Outside the lab, Boebinger enjoyed playing trombone for the FSU Marching Chiefs.

Marching Chiefs Director David Plack said Boebinger’s convivial personality served him well during his career as a Chief, allowing him to have fun and enjoy himself while preparing him for the future.

“Scott’s personality was larger than life at times — needless to say, he was well-liked and appreciated by the members of the trombone section and throughout the band,” Plack said. “Musicians are often known for their work ethic and time management. Being in a college marching band is demanding, so I do believe it prepared him and others for what’s to come post-graduation.”

Boebinger considers his participation in the Marching Chiefs to be one of the most noteworthy parts of his time at FSU. He has fond memories of traveling across the country and playing in front of a packed Doak Campbell Stadium and inspiring Florida State fans.

“I have impacted the community through my involvement with the Marching Chiefs, an organization that contributes to the Seminole spirit,” Boebinger said. “Any attendee at an FSU football game can attest to the band’s impact on the atmosphere of the game. The Marching Chiefs’ impact can be felt both on and off the football field, by the crowd, as well as by the athletes.”

After graduation, Boebinger plans to enroll in a neuroengineering graduate program, focusing on brain-machine interfaces for prosthetic limbs. Eventually, he intends to earn a Ph.D. in the field and become a university professor. His long-term goals are to teach, conduct research and design neural interfaces for prostheses.

“My overall experience at FSU has been phenomenal, and I would not trade my time spent as a Marching Chief and chemical and biomedical engineer for anything,” Boebinger said. “The demanding curriculum of chemical and biomedical engineering has vastly improved my study habits and time-management skills and helped me realize my goals are obtainable with the right amount of work and determination.”