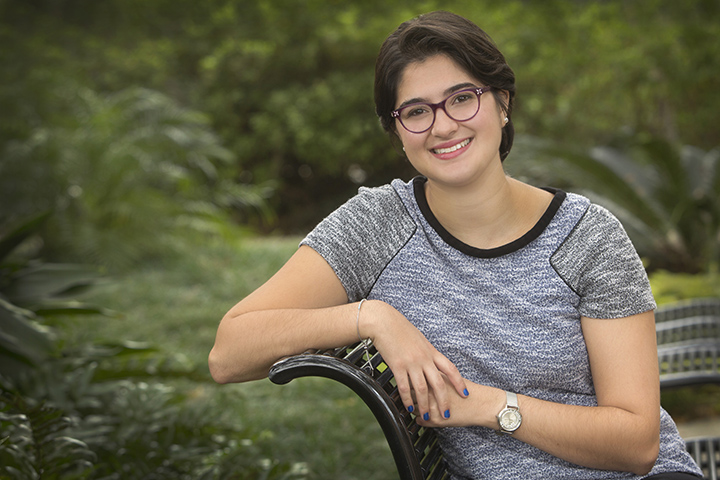 “My experiences while studying and volunteering at FSU have been the driving force behind my mission to make our university the leading educational establishment for new moms.”

Senior Elena Abascal has made the most of her time at Florida State University, and the experience has helped crystallize for her exactly what’s most important in a future career.

She discovered it was less about boosting herself and more about lifting others, specifically mothers. Abascal’s research on maternal mental health motivated her to focus on making FSU a top choice for students who are new mothers.

“I’ve never been a mother and I don’t know exactly what drew me to this subject, but I know that this topic captures my mind and have no doubt this is the field I want to pour my heart into,” Abascal said.

Abascal, a family and child sciences/pre-psychiatric nursing major, said her decision to attend FSU was solidified by the support of her parents. The family immigrated from Cuba 22 years ago and when they arrived in the United States, her parents made education a priority.

Abascal’s father encouraged her to enroll at Florida State, and she immediately realized it was the right school for her.

“I wanted to attend a school that would allow me to explore all of my passions before making a decision about how best to translate those passions into a career choice,” Abascal said. “My family and I decided that at a large research university like FSU, I would be able to explore my interests in new ways that I had never considered.”

Once on campus, Abascal began exploring the university’s vast opportunities. She researched and worked closely with professors and discovered her interest in the field of maternal health and psychiatry. Now, she wants to pursue a career as a psychiatric nurse and an advocate for maternal mental health.

Specifically, she wants to combine maternity care and end-of-life, or palliative care, to help advance the process of helping new mothers deal with the loss of their baby.

“I became interested in this particular aspect of maternal care because it is often overlooked due to the fact that it’s viewed as too sad or depressing,” Abascal said. “I don’t view it that way, but see it as a chance to help provide the support mothers need to make it through this devastating time in their lives. It’s not something people want to think about, but it’s a tragedy that has to be dealt with.”

Abascal is working toward becoming an expert in this field. This year she interned at the Day Hospital, a branch of the Brown University Albert Medical School in Providence, Rhode Island, where she worked with new mothers dealing with psychiatric illnesses. The Day Hospital is the country’s very first perinatal partial hospital program that allows new mothers suffering from emotional distress to be treated with their babies in a warm, protected environment.

“For a lot of expectant and new mothers, psychiatric care can seem scary, especially if there’s a possibility they’ll be separated from their baby,” Abascal said. “The perinatal partial hospital is a structured, outpatient program where mom and baby stay together throughout the entire treatment.”

During her junior year, she conducted research on palliative and maternity care as part of the Undergraduate Research Opportunities Program (UROP). Abascal designed an advance directive for pregnant women who receive a fatal diagnosis for their baby. Her project sought to discuss ways to give women the chance to consider which medical interventions they did and did not want for themselves and for their terminally ill baby. She presented her work at the Undergraduate Research Symposium in 2017.

“Women who experience a miscarriage or a stillbirth bring a unique and invaluable perspective to the conversation about motherhood that we don’t often hear,” Abascal said.

Samantha Goldfarb, assistant professor of public health at the FSU College of Medicine, said she admires Abascal’s commitment to applying what she learned in the classroom to her research.

“Elena’s passion for becoming a psychiatric maternal care provider seemed to solidify in her last semester at FSU,” said Goldfarb. “She began to see a gap in the system that she had the knowledge and ability to fill. Her active engagement and enthusiasm make her well-suited to be a successful provider for our most vulnerable women and children.”

In addition to her research, Abascal gets hands-on experience as a labor and delivery volunteer at Capital Regional Medical Center in Tallahassee. That opportunity has allowed her to give back to the FSU community because many of the babies’ mothers are FSU faculty, staff and graduate students.

Abascal has been honored for her dedicated volunteer work by the Tallahassee Democrat as a Volunteer of the Year Finalist.

“My advice to anyone who wants to volunteer: Be honest with yourself and assess what attitudes and motives you bring to the organization,” Abascal said. “Be willing to serve fully and joyfully, and be open to doing whatever is needed of you. There’s no place for self-importance in service.

“My experiences while studying and volunteering at FSU have been the driving force behind my mission to make our university the leading educational establishment for new moms.”

She believes more can be done on campus for pregnant students, like more childbirth education courses and other services. Abascal hopes to help promote this type of sustainable change on campus and ensure that FSU will be a top choice for new mothers who also want an unparalleled education.

“Too often, women feel they must choose between an excellent education and motherhood,” Abascal said. “I want to change that perspective, starting here on our own campus.”

Despite her countless hours of dedicated volunteer and research work, Abascal still excels in her studies and made time to get involved with campus organizations that share her ideals.

Abascal is a member of the FSU Honors Program, and she has made Dean’s List every semester. She has also received multiple scholarships, including the University Freshman Scholarship and the Girlthrive Scholarship. She currently serves on the kNOw More student advisory board and is a member of the Campus Action Team for Improvement of Sexual Health.

After graduation, she plans to pursue her master’s and doctoral degrees in nursing and continue pursuing her passion in psychiatric nursing.