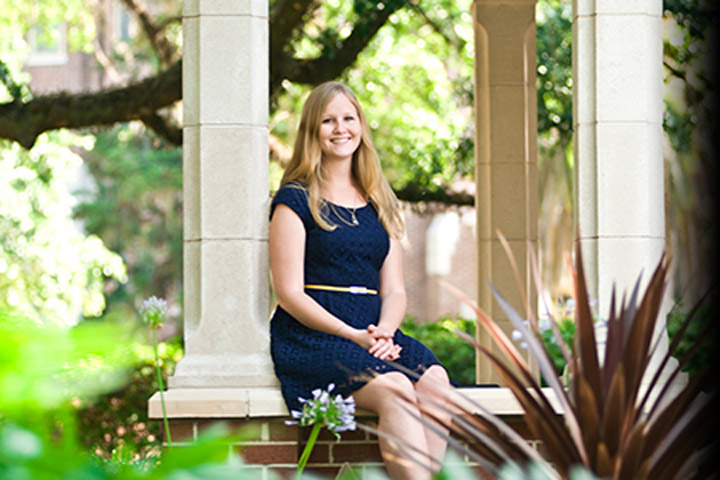 “I believe that if we allow apathy to persist, we have no hope in building a better world.”

Florida State University senior Elizabeth Martin has spent her college career working to ensure her fellow students stay informed about issues on campus, in the community and in the world.

“I believe that if we allow apathy to persist, we have no hope in building a better world,” Martin said.

As one whose actions speak as loudly as her words, Martin’s record of engagement at Florida State includes being a founding member of Progress Coalition, a student rights advocacy group that morphed into a campus political party.

“We formed in the fall of 2011 to combat tuition increases and state budget cuts to education,” she said.

“We transformed into a political party in the spring of 2012 in order to better affect change and increase our visibility on campus,” Martin said. “I helped run all aspects of the organization, as well as the two Student Government Association campaigns that we ran that semester. It was exhausting, but very rewarding.”

From canvassing to organizing rallies, Martin helped her fellow students to learn about pressing campus issues. Her work that spring, coupled with that of other members of the Progress Coalition, resulted in the highest voter turnout that Florida State’s Student Government Association had enjoyed in decades.

In the spring of 2013, Martin was tapped to run on the Progress Coalition’s presidential ticket as student body vice president.

“Although our ticket did not win the election, it was still a rewarding experience and a great honor to be nominated,” she said.

In addition to campus politics, Martin served her fellow students as part of the leadership of the Center for Participant Education, a bureau of the Student Government Association that allows students to be active participants in their own education by teaching or attending free classes on any topic that is of interest to them. As a freshman, she took CPE classes. As a sophomore, she was elected treasurer. As a junior, she became director.

“In this role, I was responsible for putting on at least three events a week,” Martin said. “Being the director of an SGA bureau with a large budget and a huge amount of programming was definitely a learning experience. Not only did I learn how to run the organization, but I also learned how to juggle doing many things at once.”

“Students who came to these events learned about alternatives to the dominant narrative of the two-party system, broadening their views to a larger political spectrum,” Martin said.

Martin’s advocacy has extended into her coursework. As the recipient of a summer 2013 Undergraduate Research and Creative Activities Award from the university, Martin received a $4,000 grant to complete research about charter schools and school choice in Florida, and how they affect socioeconomic and racial segregation. This was also the topic of her Honors-in-the-Major thesis.

“I started studying this topic during a Department of Sociology honors seminar on education inequality and school reform,” Martin said. “I believe that education should give all children equal opportunity no matter their background. School choice and charter schools are a huge issue in the state of Florida, and largely understudied in Florida as far as segregation is concerned.”

“Elizabeth is an engaged and dedicated student who understands the importance of bridging research and action,” Weissert said. “She has worked hard to learn the skills of a researcher with the purpose of making a difference in policy. Her honors work on charter schools has the potential to do just that.”

In beginning her career at Florida State, Martin received a University Freshman Scholarship and joined the Honors Program. Since then, she has become a member of Phi Beta Kappa, Phi Eta Sigma and the National Society for Collegiate Scholars.

After graduation, Martin hopes to travel the world for one year and then pursue a doctorate in political science.

“My ideal job would be to work as a professor so I can research real-world issues and try to influence policy while still teaching and trying to inspire my students like I have been inspired by my professors at Florida State,” Martin said.