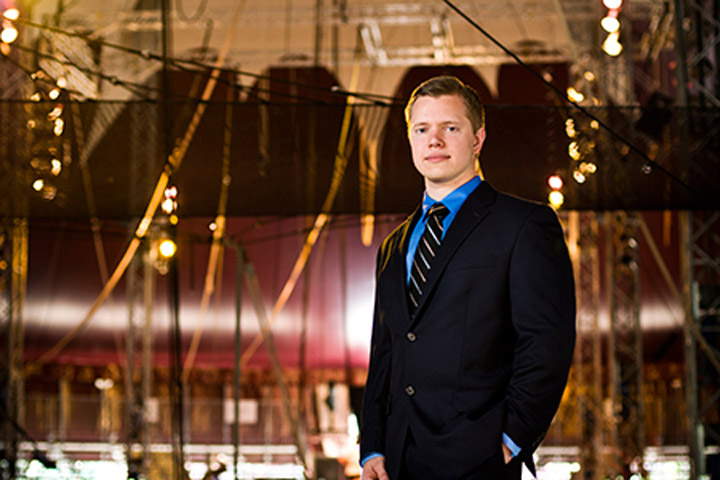 “There are a huge number of exciting potential uses and contributions that chemical simulation can make, so I want to keep doing research in this field and be a part of the major advancements that are taking place.”

Craig Filar, the director of the Office of National Fellowships at Florida State, praised Stribling’s growth as a student and campus leader since he first arrived on campus.

“I have seen Dan hone his intellect through exploration and research, develop his leadership philosophy, and serve his campus community,” Filar said. “All of these traits served Dan well in his pursuit of a Goldwater Scholarship through the Office of National Fellowships, which he received in 2012. Dan understands the value in creating a community of support and learning among inquisitive and dedicated scholars at Florida State University.”

Stribling received the Goldwater Scholarship largely based on his work in the laboratory of Florida State chemistry and biochemistry Associate Professor Wei Yang. Stribling studies protein recognition in biochemical systems using sophisticated algorithms developed in the Yang Lab. His research, which focuses on proteins found in the human body that detect infection-signaling antigens, is helping to lay the groundwork for the development of drugs that can detect antigens to help the body’s immune system to combat disease.

“Dan’s research focuses on methods for calculating the effects of specific mutations on predicting binding affinity changes between T cell receptors and alien peptide fragments,” Yang said in 2012 after Stribling had won the Goldwater. “His research results will lead to a deeper understanding of the protein-protein interactions involved in this pivotal immunological step.”

“After graduation at FSU, I want to continue studying chemistry at the Ph.D. level at a major research institution. After I finish my graduate degree, I want to get involved with a research group to continue research in computational chemistry,” Stribling said. “There are a huge number of exciting potential uses and contributions that chemical simulation can make, so I want to keep doing research in this field and be a part of the major advancements that are taking place.”

When Stribling isn’t in the lab, one place he may be found is practicing his act for the Flying High Circus, one of only two collegiate circuses in the nation. After seeing a Cirque du Soleil performance, Stribling knew he wanted to at least try some of the amazing acts he saw. He took a circus class and was hooked. He has been in the circus since his freshman year performing a hand balancing and a teeterboard act.

Another place Stribling can be found is practicing and performing with Killavil, a traditional Irish music group. A pianist from a young age, Stribling attended a summer music camp when he was 15 and saw Irish folk musicians. He liked the style, and began playing the Bouzouki, a traditional instrument. Stribling plays with Killavil at venues in Tallahassee and has competed in a competition in Ireland.

Stribling also finds time to be involved with five honor societies at Florida State. He is the incoming president of the Council of Honor Societies, last year’s president of Phi Beta Kappa and a member of Golden Key, Phi Kappa Phi and Phi Eta Sigma.

With that busy schedule of eclectic activities, Stribling is a role model for those seeking to maximize their university experience.

“I have been asked on several occasions to talk to groups of FSU students about getting the most out of college. I have tried to encourage them to actively seek things to give them a richer experience. Whether it is volunteering, academics, research, or social clubs, I support getting involved in as much as possible in academic and extracurricular activities.”