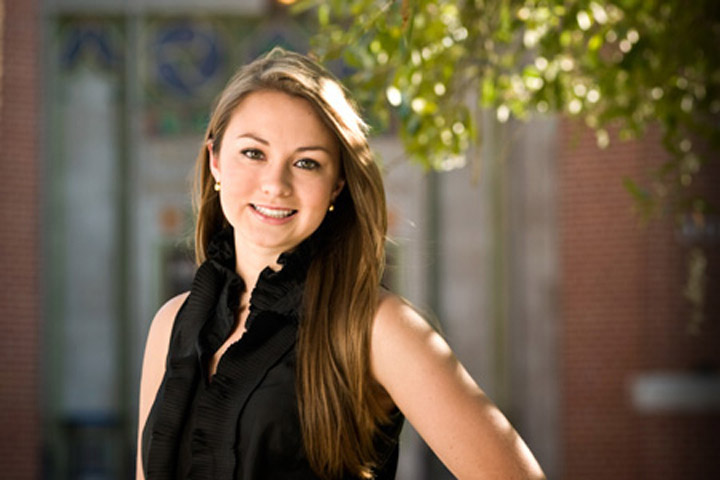 “Whatever I do in life, I will be able to draw some sort of connection from my classical studies at Florida State.”

When it comes to life and learning, Caitlin Snelson has discovered that “Latinum magnum fundamentum,” or “Latin is a great foundation.”

Snelson, a Florida State University senior, was introduced to classical studies while taking Latin in the fifth grade. She took Latin again in the seventh grade and was named Latin Student of the Year at her middle school in Orlando, Fla.

“Although I took a Latin class again in high school, it wasn’t until the spring semester of my freshman year at Florida State that I decided to pursue classics as a major,” Snelson said.

The classics is a branch of the humanities comprising the study of the languages, literature, philosophy, history and art of the ancient world — especially Greece and Rome. On the surface, the classics might not be as practical as other fields of study, such as business or science. However, it is essential to developing a solid understanding all other disciplines, according to Snelson.

“The ancient Greeks and Romans formed the tradition on which Western civilization is based,” Snelson said. “As a result, studies in science, mathematics, history, philosophy, modern languages and education all have their roots in the classical world. An education in classics has allowed me to better understand both specific subjects and the world at large.”

As a freshman, Snelson qualified for the Freshman University Scholarship, given to students who qualify for FSU’s Honors Program. What’s more, she has made the Dean’s List every fall and spring semester during her Florida State career. This is evidence that she chose the right major for herself.

“As my time at FSU has progressed, I have taken on more responsibilities and have had to become increasingly disciplined in my studies,” Snelson said. “I am very familiar with pulling ‘all-nighters.’ However, I am truly interested in and enjoy the classics, which makes studying less of a burden.”

Svetla Slaveva-Griffin, an associate professor in the Department of Classics, served as Snelson’s academic adviser and taught her in two classes, “Beginning Greek” and “Mystery Religions.” She praised Snelson as her only student in 10 years of teaching to ask for additional ancient Greek reading assignments and exercises.

“Caitlin’s motivation and energetic attitude are combined with determination and intellectual rigor,” Slaveva-Griffin said. “In the classroom or in the field of community work, Caitlin shows leadership and initiative.”

After she graduates with two bachelor’s degrees, one in classics and another in Greek, Snelson will learn firsthand how the U.S. government functions abroad as an intern with the U.S. Embassy in Frankfurt, Germany.

“From my ‘home base’ in Germany, I’m also really looking forward to being able to easily visit a multitude of countries that I’ve learned about throughout my education,” Snelson said.

“Whatever I do in life, I will be able to draw some sort of connection from my classical studies at Florida State,” Snelson said. “From understanding historical contexts to simply being able to understand Latin or Greek inscriptions on buildings, the most rewarding part of my major is having this increased knowledge about the world, both past and present.”