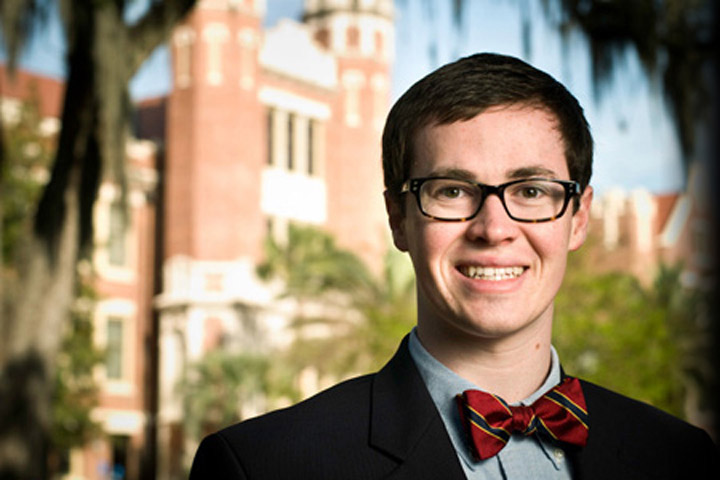 “I have attempted to live a life of integrity and excellence.”

As William Boyce concludes his career at The Florida State University, his academic “to-do” list is ramping up rather than winding down. Boyce has been named a 2011 Fulbright Full Grant Scholar to the United Kingdom, one of 35 in the country. As a result, he will obtain a Master of Literature degree next year from the University of Glasgow’s Centre for the Study of Literature, Theology and the Arts.

“I will explore the cross-pollination of Christian theology and the arts, with a focus on poetry,” Boyce said. “I will investigate the relationships between poets who have religious convictions and their creative works.”

Boyce, a brother of Pi Kappa Phi fraternity, calls the Fulbright a blessing.

“I am very humbled to represent my family, friends and Florida State University,” said Boyce, who is eager to gain “vital insights” through cultural exchange and initiate a conversation of ideas at Glasgow.

As a freshman, Boyce founded Honors Delegates, a student organization that specializes in recruiting high-achieving high-school students interested in FSU’s Honors Program. Honors Delegates continues to be instrumental in highlighting the academic strength of the university.

“The process of writing poetry hinges on perseverance,” Boyce said. “Dr. Kirby taught me to open my eyes and ears, look for compelling combinations, write a little everyday, and have fun doing so.”

“William is way beyond where I was as a poet when I was his age,” Kirby said. “He has immense ‘powers of combination,’ to use Emerson’s phrase. He can skate between topics as different as the Russian Revolution and some goofy relative of his and make it all seem effortless.”

Before his senior year, Boyce won the Mentored Research and Creative Endeavors Award, which carries a $1,000 stipend. His MRCE project, “Vox Clamantis: Contemporary Prophet-Poets,” included the opportunity to interview the former National Endowment for the Arts chairman, Dana Gioia. Prior to graduation, Boyce will have the honor of presenting his research at the ACC Meeting of the Minds, an annual symposium showcasing prominent undergraduate endeavors within the Atlantic Coast Conference.

As one of 12 members on the Student Council for Undergraduate Research and Creativity, Boyce labored to create The Owl, FSU’s only undergraduate research journal, and also contributed an article.

“If I have made any impact at FSU, I hope it can be said of me that I have attempted to live a life of integrity and excellence in everything I do, one pleasing to God,” Boyce said.

Produced by the offices of Information Technology Services and University Communications.