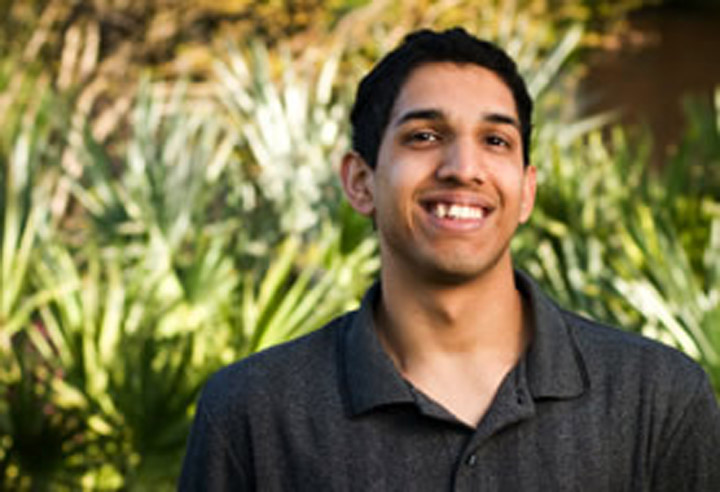 “In pure mathematics we analyze patterns of 'nature' – we build theories to uncover and explain their underlying structures.”

Vivek Pal, Florida State University rising senior and recent winner of a Goldwater Scholarship, thrives in the rarified world of pure mathematics, a world completely alien to many intelligent and well-educated people.

What exactly is “pure mathematics”? “Well, in science one is interested in better understanding nature’s complex patterns. Similarly, in pure mathematics we analyze patterns of ‘nature’; we build theories to uncover and explain their underlying structures,” said Vivek. But why concern yourself with a problem if it doesn’t have a practical application for physics or astronomy or engineering?

“We understand that eventually what we discover will have an application,” said Vivek. There are principles of pure mathematics discovered in the past that scientists only now have a computational need for, he said.

You have to admit that’s pretty cool.

Vivek seems just the sort of student the Goldwater Foundation had in mind when establishing its scholarship in 1986. The foundation seeks math and science students who display “intellectual curiosity and intensity and possess potential for significant future contributions in their chosen field.” Recipients are awarded up to $7,500 for university tuition and expenses.

Vivek’s aptitude for math became apparent when he was a student at Tallahassee’s Rickards High School. “I was drawn to math in high school by competition-style problem solving,” he said. “These problems have quite a flavor to them and are not the typical problems one finds in a textbook. They require some creativity and finesse, and are loads of fun to work on.”

As a freshman at Florida State, Vivek began taking upper-level math classes and completed the undergraduate mathematics requirements quickly, said his professor, Dr. Paolo Aluffi. “He took several of my courses at the beginning of his studies at Florida State, and he was always among the very best, even in classes where he was the youngest,” said Dr. Aluffi.

During the spring of his sophomore year, Vivek “was taking my seminar in algebraic geometry, and his participation was at the same level as that of the more advanced graduate students,” said Dr. Aluffi. “He has already begun active research work. … This is extremely unusual for a student of pure mathematics at his stage.”

Vivek has a 3.9 grade point average and has been on the President’s List since the fall of his freshman year. He is a 2010 winner of a Florida State Undergraduate Research and Creative Activity Award. He was selected for and attended the Park City Math Institute sponsored by the Institute for Advanced Study. He is a member of Phi Beta Kappa, Phi Kappa Phi and Pi Mu Epsilon, the national math honor society.

Each fall semester since coming to Florida State, Vivek has taken a course with Dr. Mark Hoeij designed to prepare students for the W.L. Putnam Mathematical Competition, a national contest for gifted undergraduates.

“The Putnam questions are so difficult that few people can solve them. Nevertheless, Vivek has done well on (them). So well, in fact, that I decided to give (him) an actual research problem that a colleague had asked me to solve,” said Dr. Hoeij.

“My colleague wanted to find a proof that in a certain sequence of polynomials, each polynomial had complex roots that are not on the unit circle. Vivek came up with a very nice solution to this problem,” said Dr. Hoeij. The colleague believes Vivek’s solution will be useful as she continues her research.

Academic excellence seems to run in Vivek’s family. His brother Suchandan, who just graduated with a Bachelor of Science in mathematics, was “also extremely successful in his studies,” said Dr. Aluffi. “They have livened up the math department the last couple of years with their enthusiasm.” Like Vivek, Suchandan is the winner of an Undergraduate Research and Creative Activity Award.

“My parents instilled in us a value for education and encouraged our interest in math and science,” said Vivek. “Florida State has been a great place for my family and me. … The faculty is both knowledgeable and approachable, a combination I don’t think is common.”

He is certainly correct in his assessment just as Dr. Aluffi was when he remarked, “Vivek is indeed a very impressive young man.”