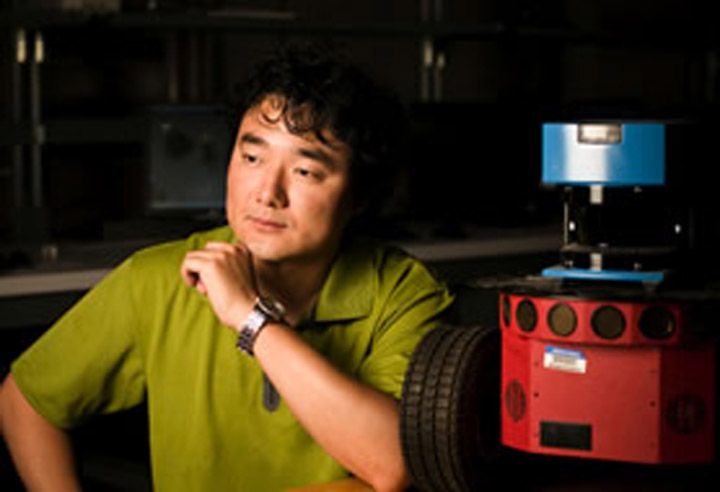 “"I was attracted (by Florida State's) state-of-the-art Center for Intelligent Systems Control and Robotics.”

When Kai Zhang steps forward to receive his Ph.D. diploma after the summer semester, he’ll be completing a journey covering three continents. Kai earned his undergraduate degree in information engineering from Nanjing University of Science and Technology in the People’s Republic of China. In 2006, he completed work for his master’s degree in computer science from Jacobs University in Bremen, Germany.

So, how did Kai decide to come to Florida State? “I was attracted (by) the state-of-the-art Center for Intelligent Systems Control and Robotics (CISCOR),” he said. CISCOR , a unit of the FAMU/FSU College of Engineering, facilitates interdisciplinary research in the automated systems area across four departments (Mechanical, Chemical, Electrical and Civil) in the College of Engineering. The primary objective of CISCOR is the development and implementation of technologies related to intelligent systems, control and robotics.

After approaching Dr. Emmanuel Collins, the director of CISCOR, Kai said, “He invited me to join the Ph.D. program in mechanical engineering at FSU when I was pursuing my master’s degree in Germany.”

“I feel very fortunate to be surrounded by the talented people here at Florida State. I have learned from all of them. Being here has been very beneficial,” he said.

Kai’s research involves the development of the intelligence needed to enable a team of robots to work together to efficiently accomplish a set of tasks. For example, these robots may be exploring an area in a search-and-rescue mission, working together to move a set of objects from one location to another, or harvesting crops from a field.

He has been a project leader at CISCOR, an integral contributor to two projects for the U.S. Army, given presentations at scientific conferences and published in a number of professional journals.

“Kai is a very creative and enthusiastic researcher,” said Dr. Collins. “What I most enjoyed about working with him is that he is fearless when it comes to trying new ideas. … I have seen him grow tremendously over the few years that we have worked together.”

As complex and involving as Kai’s academic life is, he has made time for another of his passions — supporting his fellow Chinese students and sharing Chinese culture with others. “I am devoted to promoting the exchange of Chinese and American cultures,” he said.

From 2006 to 2009, Kai served as vice president of the Chinese Student and Scholar Association. “I organized many events like the Chinese New Year Festival — 600 people attended — and participation in FSU football food services.”

He also helped organize a Dumpling Workshop with the Chinese Language and Culture Association, which he points out, participants very much enjoyed.

Perhaps Kai’s interest in cross-cultural projects has something to do with what he said has been his greatest challenge — “cultural adaptation.”

“American people think differently than Chinese people. (I have found) people here easy to negotiate with. I think American people are more flexible in their thinking.

“Tallahassee people have been very kind to me,” said Kai, which isn’t a surprise to his friends and colleagues. “If I get lost driving in Tallahassee and ask for directions, people will say, ‘Follow me, I will show you.'”

So what’s next for Kai? My (goal) is to become a senior engineer in the field of autonomous guided vehicles, humanoid robot, robot learning, motion controls and communication systems using my scientific and engineering skills,” he said. “My long-term plan is to become a chief technical officer in a well-known multinational corporation.”