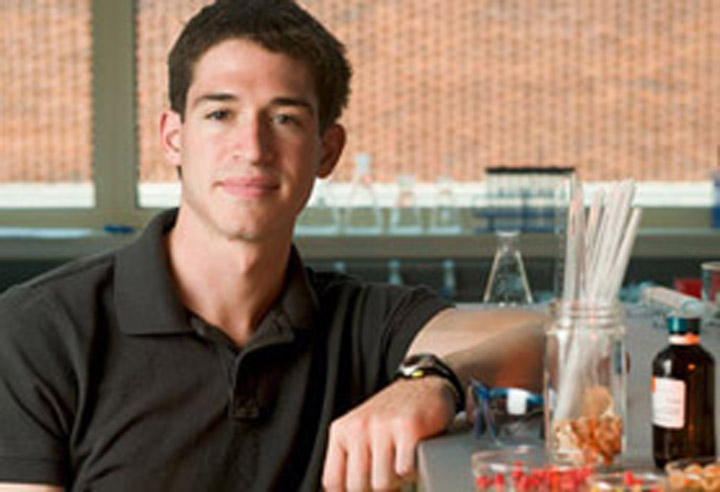 “I fit in to the life at FSU in all different levels; the professors are comfortable to talk with, the campus has new facilities in my science area of interest, and I am able to collaborate well with students and faculty.”

Conrad Gleber is a remarkable student. Excelling as one of the top students in the biochemistry department, Conrad is highly involved in scientific research in multiple academic laboratories. He is the former president of the FSU Triathlon Club and is a published author in graphic design. Conrad is the embodiment of the FSU spirit, and due to all of his accomplishments, he has been selected as a Student Star on the Florida State University campus.

Academically, Conrad is at the top of his class, having been on the Dean’s List every semester he’s been at Florida State. From Fall ’07 to Fall ’08, Conrad worked in the Oceanography department devising methods for preparing stable isotope labeled biomass. Currently, Conrad is working on a drug discovery project between organic chemistry and biochemistry. He is attempting to design and test a new approach to bactericidal therapies with emphasis on examining and exploring the possibility of a multifaceted attack on infectious human pathogens. More specifically, he hopes that by examining this multifaceted attack, a new, more powerful line of medicines can be created which prevent the increasing problem of antibiotic drug resistance. This semester (Spring 2009) Conrad Gleber received the Undergraduate Research and Creativity Award and the Bess Ward Honors Thesis Award for his strides in drug discovery. All told, he feels his work is helping Florida State gain acclaim in the science community.

Outside of the lab, Conrad is an athlete, serving as the past president of the FSU Triathlon Club. He hopes the Florida State University tri-club becomes one of the most competitive in the nation. As part of his responsibilities, he helped coordinate two local triathlons races. One is a nationally known United States Collegiate Triathlon Series (USCTS) Race and the other is the Florida Collegiate Triathlon Conference (FCTC) Championship. He is still active with the club, and Conrad hopes that both of these races will raise the stature of FSU within the collegiate triathlon community.

While Conrad is a both a scientist and triathlete, he is also a graphic designer. He has extensive experience in design and co-authored a graphic design book called Useless Machines with Kevin Moore, an FSU graduate who is now a graduate student in London. Conrad notes that the book has been well-accepted by the international graphic design community and is an original and innovative project that can influence students in digital art and multimedia design.

Certainly, Conrad’s impact on the FSU community is quite impressive. Having been educated at local Leon High School, he always felt as if he belonged at Florida State. In high school, he dual-enrolled to get a perspective of college life. As a result of this experience, a high standard was set that no other university could come close to matching. In return, Conrad tried to give his time and energy to FSU. He will graduate with honors from the biochemistry department. After graduation, Conrad plans to enroll in either a dual-degree program pursuing a joint M.D./Ph.D. or pursue a Ph.D. to continue his antibiotics research. Here at FSU, he clearly established himself as a rising star in the scientific community.