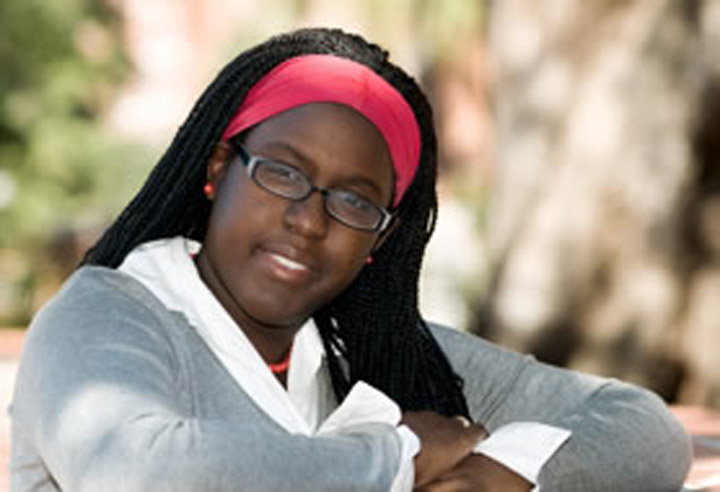 “When I came to FSU, I just loved the warm atmosphere. In my four years here, I have yet to be let down.”

Natalie Williams has a passion for helping people through her science and her service.

Through her Honors in the Major project, Williams is conducting research on behavioral sensitization in male rats. Using the psychostimulant apomorphine, Williams is exploring whether the drug can lead to enhanced behavior responses or different behaviors that are enhanced or happen more frequently. Her findings, she says, may shed further light in the area of addiction studies. “The experiment will be great because it will add onto the work that’s already being done in this area,” Williams says.

After finishing her pre-med studies with a Bachelor of Science degree in biological science, Williams plans to attend medical school at Florida State. “I actually want to do general practice just because I like variety, and it will leave me open to doing service,” says Williams, who sees herself as a physician working in underserved communities and doing mission work.

Serving others is at the heart of what most motivates Williams.

Originally from Ft. Lauderdale, Williams graduated from Blanche Ely High School in Pompano Beach. When she and her parents arrived on Florida State’s campus, she found herself on the receiving end of the willingness to help she says permeates the campus.

“We pretty much could ask anybody anything,” says Williams, who is the first in her family to attend college. “Or, they would stop and give us information—if we looked moderately lost, people would help us.”

That meant a lot to Williams then and still does. “When I came to FSU, I just loved the warm atmosphere,” she says. “In my four years here, I have yet to be let down.”

Since those first days on campus, Williams says she’s been a member of several organizations. For instance, she’s served as a biology mentor, vice president of the Multi-cultural Association of Pre-medical Students (MAPs) and vice president of the American Medical Women’s Association. “But then, I kind of wanted to do some traveling.” So, she joined Beyond Borders at Florida State, traveling to Germany, and later, though other volunteer activities, twice traveled to Tennessee.

“FSU has given me an amazing four years,” she says. “I could have gone to a lot of schools—I had a lot of acceptances—I’m really happy that I came here.”