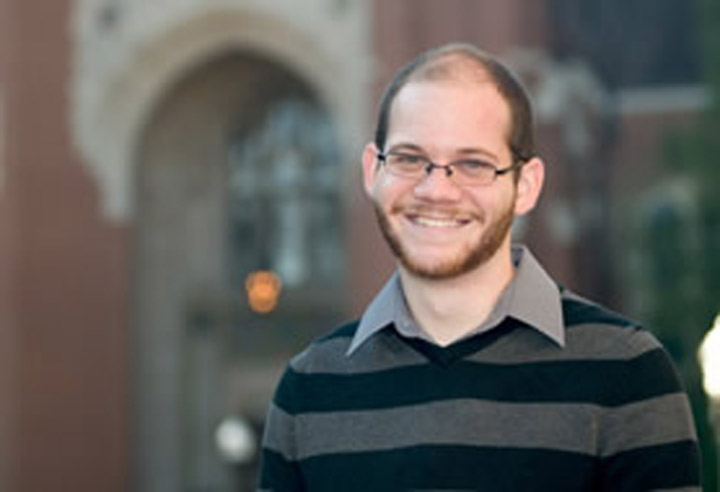 “…I'm interested in thinking about problems with real, meaningful effects on people's lives.”

What about workers makes them deserve a wage? When do wages count as deserved income? How much pay do people deserve when they’re working?

“I took a look at two previous theories that have been put forward in philosophy, and I found that they were unsatisfactory for one reason or another,” he says. “I put forth my own theory in the end with three requirements, then I linked it to the living-wage movement.”

Interested in both ethics and political philosophy, Jenkins considers them “two fields of philosophy that have the chance to impact people’s lives directly.”

That means there’ll be no pondering the imponderable for Jenkins, who majored in philosophy and minored in communication.

“Lots of people think [philosophy is] sitting in your ivory tower and thinking about questions that don’t have real answers—and there might be some of that,” Jenkins admits, “but I’m interested in thinking about problems with real, meaningful effects on people’s lives.”

The way Jenkins sees it, his degree in philosophy from Florida State gives him lots of options down the road to do just that.

“[I] can be a professor,” he says. “I’ve also thought about working for a non-profit … or for a think tank in Washington, D.C.,” says the December 2008 graduate, who was a two-time Ethics Bowl team member and a winner of the Phi Beta Kappa Marion Jewell Hay award that goes to a graduating senior who has conducted outstanding research.

Any one of those professional pursuits would allow Jenkins to continue his journey into the world of philosophy. He is preparing applications for graduate school, where he will continue to pursue his passion for philosophy. It’s a drive that was rooted in his upbringing.

“My parents always told me that I should be concerned for those who are less fortunate than I was,” he says. “… As long as I’m interested in [philosophy as] an intellectual pursuit … if I can use my talents to make the lives of others better, I think that’s what I should be doing.”

Completing his 50-page thesis marked the pinnacle of his Florida State experience, Jenkins says. “It was the longest thing I’ve written, and I think I wrote it well. I learned how to manage the writing of a paper like that, bringing in others’ thinking to support my ideas. It was a really new experience,” he explains.

“To successfully defend [my thesis] was like a metaphor for my larger college experience coming to an end,” he says. “I’ve done a lot here. I’ve made a lot of really good friends. I’ve made friends with professors. I’ve learned an awful lot from them, especially through my thesis. They’ve helped me grow as a student and philosopher.”