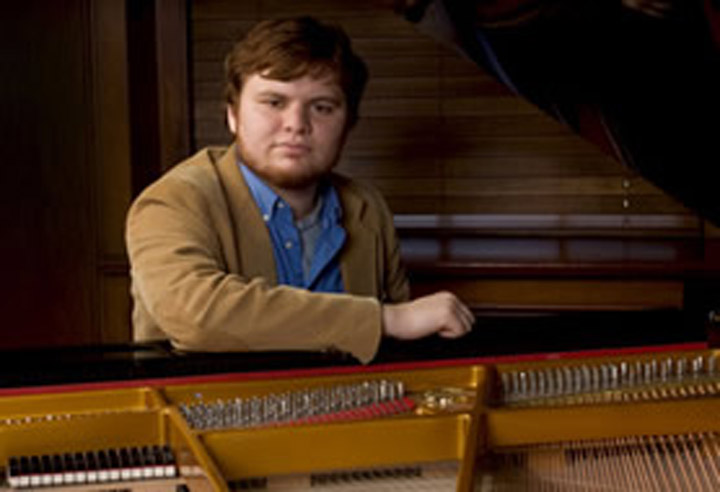 “I have really enjoyed getting involved in the composition department through the student composer's organization and participating in the University Orchestras as a double bassist.”

While many teens tune their tastes to the latest chart-topping hits, Pierce Gradone’s idea of “musical fulfillment” was more of an acquired, vintage variety.

“After being introduced to the music of Beethoven and Hungarian composer Béla Bartók late in high school, I began to write music in those styles and found that I derived a great deal of musical fulfillment from those experiences,” recalls the 22-year-old from Sarasota, whose great-uncle, Timothy Broxson, played alongside Florida State University President T.K. Wetherell in the 1965 Seminole football season. “I then realized that this was something that I could dedicate my professional life to and pursue at a higher level.”

Originally drawn to Florida State’s large and reputable College of Music, Gradone visited campus and left further impressed by the diversity and quality of the school’s faculty and curriculum. As a senior music composition major, graduating Spring 2009 with a bachelor’s degree in music, Gradone’s collegiate experience has hit all of the high notes he hoped it would.

“I have really enjoyed getting involved in the composition department through the student composer’s organization and participating in the University Orchestras as a double bassist,” says Gradone, who is a member of the Dean’s Student Advisory Council in the College of Music and the Vice-President of Society of Composers, Inc. “Both experiences have provided essential lessons in leadership and musicianship that will continue to affect my musical career for years to come.”

Though his early influences, Beethoven and Bartók, produced work dating back to the 19th century, Gradone’s own compositions are decidedly modern and contemporary, falling with “art music” genre of the mid- to late-20th and 21st centuries, he says.

“A good example of this style would be the eerie music from the film ‘2001: A Space Odyssey,’ ‘Eyes Wide Shut,’ ‘The Shining’ or the solo cello and string music in ‘There Will Be Blood,'” he explains. “My musical style could best be described as post-tonal (not fitting into a scale) and rhythmically active and colorful in musical texture.”

And, there’s more to Gradone’s musical interests than meets the ear.

“Artistically, I am interested in the incorporation of social issues into an artistic musical landscape,” he says. “I have collaborated and composed several pieces that address such issues as feminism, human trafficking and slavery.”

In recognition of his musical achievement, Gradone received the Undergraduate Research and Creative Activity Award, a $4,000 stipend to pursue research or work on a creative activity.

In the fall of 2008, his work was featured in concert at Florida State. “Several different groups of instrumentalists performed works that I had written over the past three years and displayed a high degree of virtuosity in performing my often-times-difficult music,” he says. “I was proud to have my wonderful wife, my parents and many of my friends and colleagues present to share that special night with me.”

Gradone has applied to several graduate programs. His goal: to a Ph.D. in composition and then serving as a college professor while continuing to pursue the composition of new music.