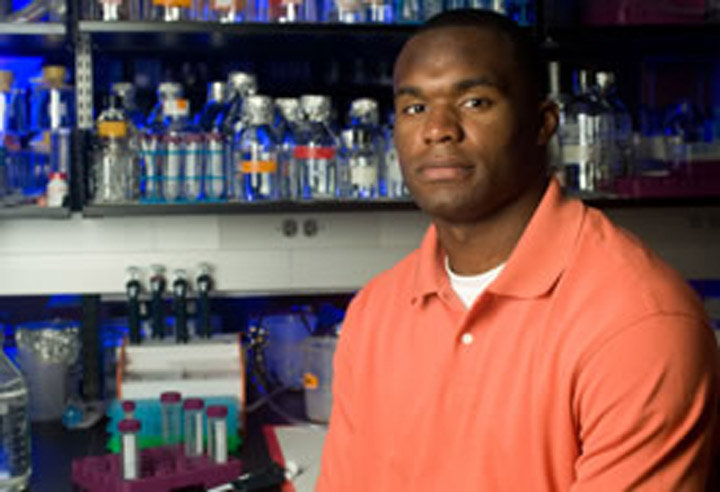 “In a society where sports stars are revered for their athletic prowess, I attempt to eliminate the stereotype that 'jocks can't think' by excelling academically.”

“In a society where sports stars are revered for their athletic prowess, I attempt to eliminate the stereotype that ‘jocks can’t think’ by excelling academically,” says Myron Rolle, a star defensive back for FSU’s Seminoles who, as an Honors student, maintains a near perfect GPA.

Ranked the number one high school football prospect by ESPN, and offered 83 scholarships from schools around the country, Myron chose to study at FSU “because it was the only school that was committed to aiding me in reaching my goals as a standout student, an All-American athlete, and a significant contributor to the local community.”

Myron, who plans to become a doctor, will graduate this summer having completed the requirements for his bachelor’s degree in Exercise Science in only two and a half years. He applies his classroom learning—nutrition, physiological adaptations to training, metabolism, and biochemical pathways affected by exercise—to his performance as a Division 1 athlete.

He has received numerous awards and top rankings for his athletic achievements. Two awards in particular make him especially proud. Winning the ACC Defensive Rookie of the Year in the fall of 2006 validated his entrance into college football. “I always believed I could play Division 1 football, but winning that award made my beliefs a reality.” To be named to the Arthur Ashe Foundation All-America Academic Team is to be named a scholar-athlete. “My parents encouraged the ‘scholar’ more than the ‘athlete.’ With this award, I was acknowledged as someone who has excelled in both.”

Recognizing his abilities, Tim Logan, professor of Biochemistry, offered Myron the opportunity to conduct research in his lab. Myron says, “Previous studies have shown that there are similarities with the pathways hypoxic environment and certain enzyme complexes. Our research involved study of the human mesenchymal stem cells and the characteristics of their metabolism in comparison to cancer cells.” For his research, Myron has been awarded a 2008 Undergraduate Research and Creative Activity Award.

Believing in giving back to the community, Myron has volunteered for various high schools and non-profit organizations, but the majority of his time has been devoted to the Athletic Department’s Student Athlete Advisory Council. “I truly enjoy speaking to youth in an effort to impart any knowledge, experience, or advice that may be beneficial to their development.”

His own development has been aided through his membership in Kappa Alpha Psi. “Our fraternity is founded on the principle of achievement. As my brother, Charles H.F. Davis, says, ‘Iron sharpens iron.’ Spending time around like-minded men of color who are excelling in every aspect in their lives has pushed me to reach even higher.”

Indeed, he is reaching higher. Since he has not exhausted his eligibility to play football, Myron now plans to pursue a master’s in Public Administration, an academic field that will aid him in “running a medical clinic later in life.” He will declare for the NFL draft in January 2009, which is not enough time to complete his master’s. But, he says, “I plan to return during off-season to finish up.”