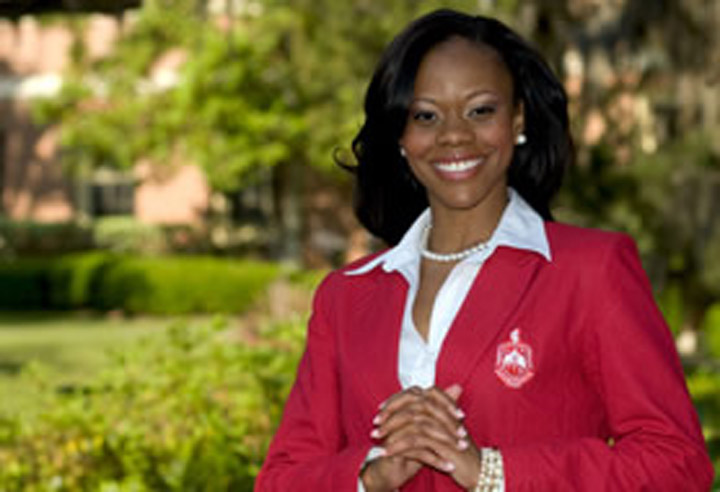 “My Christian faith and my perseverance would not allow me to crumble because of environmental factors or a lack of financial resources. My circumstances actually helped me develop into the hard working, goal-oriented individual that I am today.”

“I grew up in the raw inner cities of Opa-Locka and Liberty City. My Christian faith and my perseverance would not allow me to crumble because of environmental factors or a lack of financial resources. My circumstances actually helped me develop into the hard working, goal-oriented individual that I am today,” says Chardea Murray, who graduated in April with two bachelor’s degrees—in Political Science and in English.

“My mother was truly inspiring, although we struggled financially at times while she studied for her bachelor’s and master’s degrees, but God gave me the strength to be proactive. I turned my economic circumstances into a positive by working many jobs, which helped me develop time management, organizational, and customer service skills. I also realized how much I enjoy helping people.”

With her eye on a career in the Law, Chardea began acquiring experience early. As a high school freshman, she worked for an attorney who would tell her stories about his political and social involvement on Florida State’s campus. “After hearing of his wonderful experiences, I knew FSU was the ideal school for me!” She chose to major in Political Science, thinking she would only minor in English; however, she “fell in love with literature and decided to work toward two degrees.”

Since January of 2007, Chardea has held a paid internship at the Parks & Crump law firm, and this past semester she finished up “a truly rewarding internship” with Governor Charlie Crist’s Office of Policy and Budget. “While engaged in intensive research projects, I interacted with professionals, legislators, and lobbyists from all over the State.” Here on campus, she served for three semesters as the chief justice of the National Pan Hellenic Council, a position in which she “promoted a safe, respectful atmosphere among the Greek community.” She has also joined the Phi Alpha Delta Pre-Law Society and the National Association of Future Black Law Students.

Through her membership in the “hardworking” Delta Sigma Theta Sorority, Chardea has dedicated countless hours to community service, which, she says, has been “geared toward uplifting the Black community, as well as the FSU student body, through events that promote economic and educational development, political and international awareness, and physical and mental health.” As the social action chair, she helps spread awareness of these issues by writing for the sorority’s monthly newsletter, The Delta Edition. Her efforts have brought her induction into the Order of Omega Greek Honor Society.

Although she has been accepted into several law schools, Chardea has decided to attend Florida A & M. With a law degree, she will serve as a public defender and work her way toward a judgeship. She explains, “The lives of many African-American men are literally being taken from them due to our racially biased ‘judicial’ system. I want to be a solution to this plague in our community!”