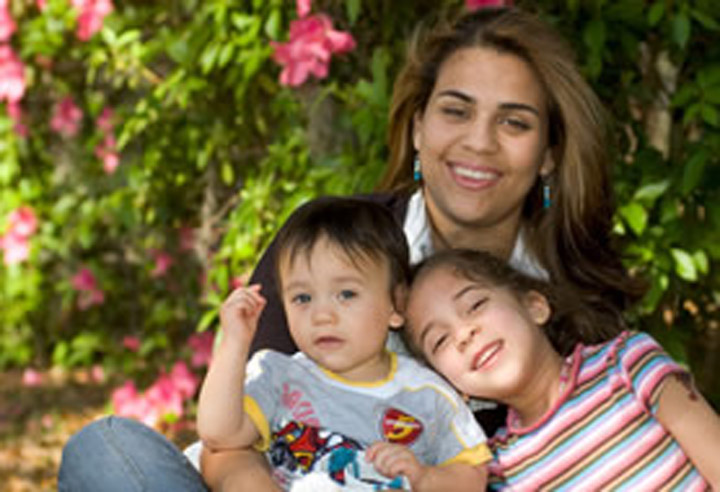 “When I became pregnant at 17 years old, everyone thought I would become another statistic: dropping out of high school and working a dead end job for the rest of my life. But I did not quit.”

When I became pregnant at 17 years old, everyone thought I would become another statistic: dropping out of high school and working a dead end job for the rest of my life. But I did not quit; I graduated with the rest of my class and immediately started Miami Dade College,” says Michelle Lopez, a mother of two young children, who will soon graduate with two bachelor’s degrees—in History (with honors) and Interdisciplinary Social Science.

“I get my determination from my mother. She often stayed home with my daughter so I could attend classes. My husband convinced me that it was not impossible to attend Florida State, the university I had dreamed of attending since the 6th grade. After getting my AA in Teaching Secondary History, I was accepted.

“Since high school I’ve wanted to become a teacher. I grew up hearing stories from my family, stories that have had a profound impact on how I view History and ones that I will use to help my students understand world events. My mother’s sister lived in Panama until Noriega came to power. Everything became extremely violent—people just disappeared, never to be heard from again. My step-father was one of the Pedro Pan mission children; he was sent from Cuba to the state of Washington.

“For my Honors in the Major Thesis in History, I began researching the Clean Water Act. The U.S. has used federal legislation to keep water regulation uniform across the country, but in the past ten years the Supreme Court has twice seen fit to decide against the interests of the environment, specifically our wetlands.

“In the middle of research, I found out I was pregnant again, but my director, Dr. Frederick Davis [assistant professor of History], encouraged me to continue. I gave birth to my son, finished off the semester, and began again this fall when I successfully defended my Thesis. In April, I presented my research at the ACC Meeting of the Minds.

“Working toward a major in Middle and Secondary Social Science Education, I would have been doing my internship this spring, but space in Leon County was limited. Rather than push back my graduation, I changed my Education major to Interdisciplinary Social Science. Not having completed the required internship, I took the Florida Teacher Certification Exam for Mathematics, grades 5 through 9, and am now able to teach Social Science, as well as basic Math, Algebra, and Geometry.

“My struggles have made me realize how many student-parents there are on campus, so I’m starting a support group for them and for those who are responsible for siblings or grandparents. It’s horrible when your child gets sick, but your worry is compounded when you have to miss classes, assignments, and exams to stay home with them. Excused absences do not extend to children or other dependents; I hope to change that.

“With a hiring freeze in almost all of Florida’s school districts, the History Department’s Master’s Thesis program is my next best step. I will never give up my goal of becoming a teacher. There are not enough who are bilingual, so I want to work with students who are learning English as a second language, either near Ocala’s growing Hispanic population or with Gadsden County’s migrant population.”