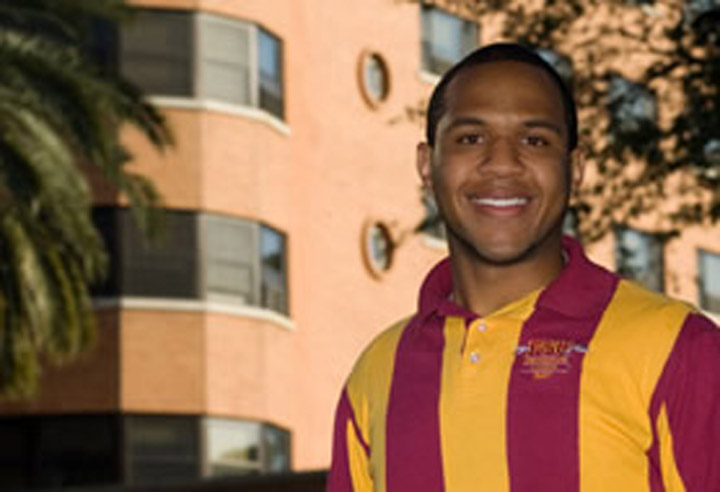 “I learned that you don't need a title to make a difference. The difference comes when passion meets action.”

“To have the best time of your life at FSU, fall in love. Fall in love by becoming passionate about something. Find your passion by getting involved on campus,” advises Daniel Best, a senior who has served as an Orientation leader, a resident assistant (RA), a Greek Judicial Board member, worked in Student Government, and helped improve his fraternity, Theta Chi, while managing to complete ten screenplays.

“While remaining quite busy with campus life, I’ve continued to appear on the Dean’s List. It’s important to get involved,” Daniel says, “but not to a point where your grades suffer.”

He believes a key component of his impact on his fellow students is “having one-on-one relationships,” so that everyone he comes in contact with doesn’t feel like a number, rather an important individual that is vital to FSU. Now in his third year as an RA, Daniel learned this valuable lesson when he first began serving in that position. “It helped me see different aspects of people—when they are sad, anxious, or nervous—and realized I could help them through each one.” As an Orientation leader, he served “on the forefront, making sure students and parents were comfortable with the University, enabling them to make the transition to college life easier.”

Serving on the Greek Judicial Board he learned how to deal with students in a different manner. “I heard cases with the mindset of making sure that they understood the Seminole Creed, which outlines the eight values that help students bleed Garnet and Gold responsibly. I realized, however, that no one really knew the Creed, so while working in Student Government, I created Trailblazers, an organization with a mission to ensure the campus is knowledgeable about it.”

Daniel is most proud of his accomplishments for his fraternity, Theta Chi, for which he rushed in the fall of 2005. A minor setback—losing an election—taught him another valuable lesson. He was assigned chairman of rush/recruitment. “Initially, I wasn’t very happy about it, but I soon realized that the change we were trying to make was bigger than me. So, I created a new program, Expect Everything, informing my brothers we should not settle for less. We recruited the Delta class, 55 new members, which was the largest Theta Chi pledge class in the nation. My brothers honored me by naming an award after me—the Daniel Best Future of the Chapter Award. I learned that you don’t need a title to make a difference. The difference comes when passion meets action.”

Following graduation, and a summer of recharging, Daniel plans to enter graduate school at Ohio State to study Student Affairs and Higher Education. “As a profession, Student Affairs deals with everyday campus issues. I love being there for my friends, and I would love to implement policies that will impact their lives.”