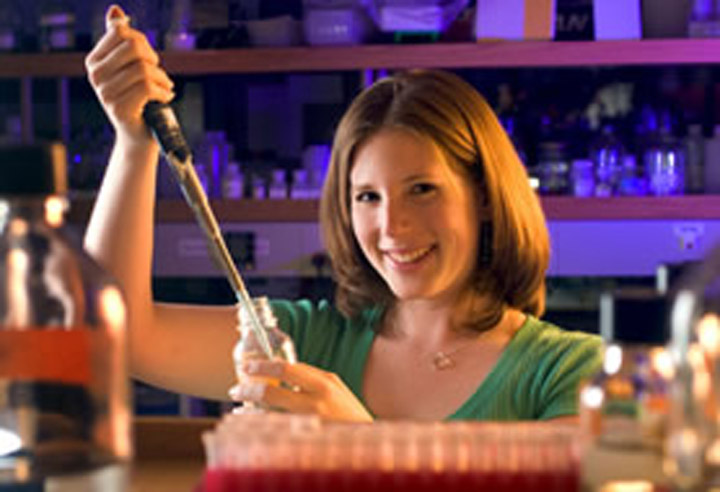 “Research in the lab opened up the realm of the unknown. I learned it is imperative to think critically, beyond what is expected, which will enable me to be a better doctor, one who is open to new ideas so essential to medical progress.”

“My fascination with the medical field was sparked by my high school Health Science teacher who taught us about the miraculous human body. I then had wonderful experiences—volunteering in an emergency room, shadowing a family physician, and working in a gynecologist’s office—which helped me realize that becoming a doctor is not only the right career choice for me but also an achievable dream,” says Allison Reiter, an Honors senior who is carrying an Honors in the Major in Exercise Science and a double minor in Biology and Chemistry.

In her sophomore year at FSU, Allison was introduced to the excitement of research by an “incredible role model”—Cathy Levenson, associate professor of Nutrition, Food and Exercise Science. Allison says, “Unlike my classes where I had been taught already known concepts, research in the lab opened up the realm of the unknown. I learned it is imperative to think critically, beyond what is expected, which will enable me to be a better doctor, one who is open to new ideas so essential to medical progress.”

Dr. Levenson is now guiding Allison through her Honors Thesis project, which involves “researching the effect of dietary zinc deficiency on the regulation of stem cell proliferation (growth of new brain cells) in the olfactory bulb of adult rats, and studying a regulator of neuronal growth and survival, brain derived neurotrophic factor (BDNF) and two BNDF receptors, Trk B and p75/NTR.”

Allison explains, “This project is particularly interesting because of its possible clinical implications—the olfactory bulb is one of the regions where Alzheimer’s plaques develop and the early stages of Parkinson’s disease appear. We also know that the aged are most frequently at risk for zinc deficiency. Understanding the mechanisms behind the proliferation of new brain cells could lead to developing treatments for neurodegenerative disorders.”

Outside the research lab, Allison’s cultural and religious community is Hillel, where, in 2006, she served as president. Hillel offers religious services each week for Shabbat and on High Holidays, and other programs including monthly bagel lunches, for FSU’s 4000 Jewish students. But, she says, “Anyone interested in any aspect of Judaism is welcome.” She is now serving as director of the Jewish Student Union, a position in which she coordinates “events such as Kosher Wing Night (free chicken wings!), the huge mid-winter Chanukkah Party, and the Purim Carnival held on Union Green in the spring.”

Her “community of pre-med women” is the FSU chapter of the American Women’s Medical Association. As vice president, Allison “coordinates community volunteer projects, including cooking dinners at Tallahassee’s Homeless Shelter and building homes for families in need through Rainbow Rehab.” She also advocates for women’s health issues at each meeting.

Looking back, Allison says, “I felt that by attending FSU I would receive a quality education, opportunities to be involved on campus, and a strong sense of school spirit. My initial feelings were right on!”