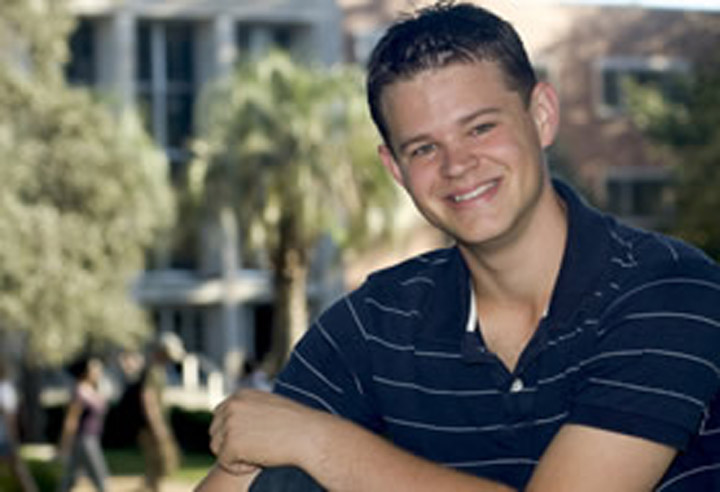 “When a conflict threatens, the language and tone [of the diplomats' letters] can be very dramatic, reminding me of an action movie, only it's played out in text.”

Upon entering college, Joshua Goodman knew he wanted to become a teacher, perhaps a high school History teacher. “I’ve always enjoyed learning about any kind of History,” he says, “but nothing I studied felt like something I wanted to specialize in.”

He preferred European History but couldn’t name a specific era. “In my sophomore year,” he says, “when I was still bouncing around, I studied for a semester at FSU’s London Study Center. The professors used the city to teach their courses in British History and Literature, taking us to see buildings, museums, art galleries, and period plays. On weekends, I visited Scotland, Wales, and Ireland; spent ten days in Italy, and Thanksgiving in Barcelona.” The experience gave him “a personal connection to these places.”

The following year he took Dr. Jim Jones’ World War II course, choosing to write about British Prime Minister Neville Chamberlain and his policy of appeasement. “For the first time,” Josh says, “research was rewarding.” His interests had broadened to include the British government’s policy-making process, which, in turn, inspired his research for Dr. Jones’ upcoming course on the Civil War.

Josh linked the two interests by examining the role cotton played in the relationship between the Confederacy and the British. “Because this relationship was primarily handled through diplomats and foreign offices, most of my source material was correspondence. It was so interesting to read letters that traveled back and forth across the Atlantic, following events of the war, attempting to ‘spin’ situations to make points or gain favor.”

Josh had discovered Diplomatic History, which deals with the relationships between states as revealed through the communications of diplomatic missions. “When a conflict threatens, the language and tone can be very dramatic, reminding me of an action movie, only it’s played out in text.”

Josh says, “I have yet to meet a professor at Florida State with whom I couldn’t enjoy working, but Dr. Jones rises to the top as the most dynamic and knowledgeable.” Dr. Jones is now directing his Honors in the Major thesis, tentatively titled, A Cry for Justice: American Public Opinion and U.S. Foreign Affairs Following the Treaty of Locarno, 1925-26.

After graduation in spring 2008, Josh plans to attend graduate school. “I want to teach History at the college level,” he says, “and I am focusing on learning as much as I can about the topics that interest me—Diplomatic History of the U.S. and Britain, 19th-20th century European History, and American Political History.”

To gain teaching experience, Josh has spent the past semester as co-instructor of a Freshman Interest Group (FIG) class, focusing on the Liberal Arts, since most of his students are pursuing various majors. “I really wanted this experience to be helpful and meaningful to our students,” he says. “Now that we’re into our fourth month, I feel confident that we are getting some very good information to them.”

Josh says, “My time at FSU has been nothing short of life-changing; I’m ready to move forward.”