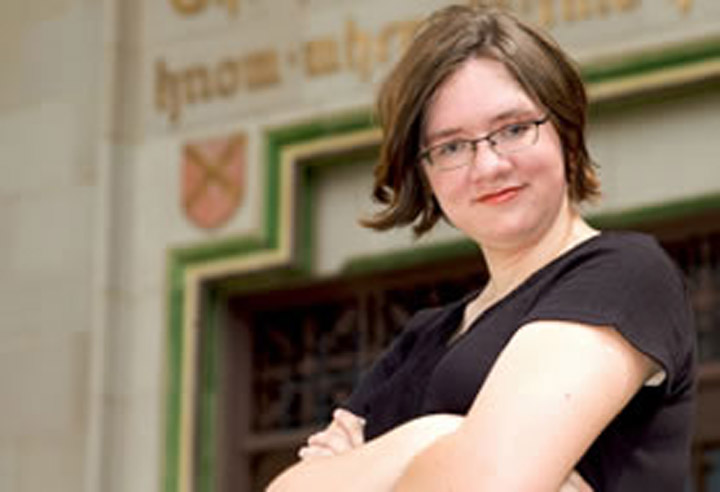 “Can we create an adequate life for most people in this society?.…It's not only possible, it's a matter of vital urgency.”

“I majored in Political Science because I couldn’t not major in it,” says Natalie Binder. “I’ve always wanted to do something good for other people. You can pick the biggest problem—global warming, AIDS, or poverty—but the underlying question is the feasibility of modern civilization. Six billion people, with limited resources and conflicting ambitions, have been forced by urbanization and the Internet into the closest quarters—physically, socially, politically, and economically. Can we create an adequate life for most people in this society? As a student I can say, well, that’s an interesting question, but as a citizen of the world I must add, it’s not only possible, it’s a matter of vital urgency.”

Natalie began college at the age of 16 at Simon’s Rock College of Bard, which, she says, is one of the few colleges that primarily accepts students at that young age. With her AA in hand, she volunteered for AmeriCorps*NCCC (National Civilian Community Corps). “Our team would live in a city for one to two months, providing support to local charities. We built three houses in Hartford, Connecticut in eight weeks—in February! In Sarasota, Florida, we ran a major Red Cross warehouse during the ’04 hurricane season.”

Arriving at Florida State, Natalie signed up for a double major in Political Science and Interdisciplinary Social Sciences. Last summer, while she was attending classes, violence broke out between Lebanon and Israel. Anxious to help, she asked the Middle Eastern Studies professors she knew if FSU could sponsor lectures about the issue. The result was the semester-long seminar “Anatomy of a Conflict: A Hot Summer in Lebanon and Israel,” which included personal accounts of the fighting and tutorials on Hezbollah and political Islam. Natalie says, “The lectures were extremely well attended and supported by both Jewish and Arab student unions. I was very pleased at how well it worked out.”

As a Fulbright winner, Natalie will soon begin a ten-month stint teaching English at a girls’ Islamic boarding school in Indonesia. Due to her background and interest in Islamic studies, she was selected for a special diplomatic post sponsored by the American Embassy in Indonesia. She plans “to develop a web and video blog where the girls can practice their English skills and maybe become pen pals with American girls.”

She takes with her “a sense that we may be on the cusp of something better than an adequate life for most people. I believe that every risk and terror modern civilization has shown us promises an equal reward.”