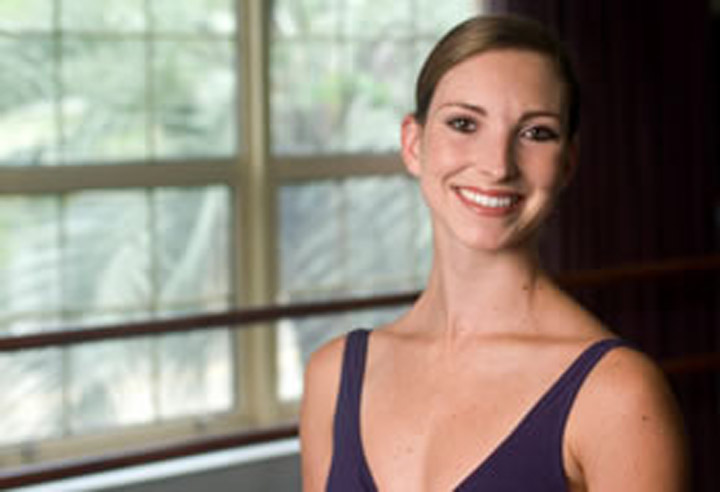 “There is so much to discover within the field of Dance. I am interested in administration, choreography, and historical research.”

“For centuries, dance has been an integral part of German culture, defining its people and voicing their perspectives on political and social issues,” writes Aline Wachsmuth, recent winner of Florida State’s Undergraduate Research and Creative Activity Award (URCAA).

“Prior to World War II, German Expressionist dancers greatly influenced American choreographers and laid the groundwork for the upcoming wave of postmodernist dance in America. After 1945, the Western world’s window into the dance philosophies and practices of East German artists shut as an iron curtain was drawn.” Yet, the fall of the Berlin Wall freed East German choreographers to share their work with the world.

Some of the questions that Aline is researching this summer as she travels through Europe, using the funding provided by the URCAA, are—Was there an underground community? What was allowed; what was not? How did modern dance choreography reflect the sociopolitical issues that people were undergoing? Did the government provide funding for the arts?

“To help fill a void in historical dance literature,” she is interviewing individuals with direct knowledge and is researching dance archives and libraries. Born and raised in Germany, Aline should have no trouble with her research—she is trilingual (German, French, and English).

Dancing since the age of 3, Aline’s immediate goal is to become a professional contemporary/modern dancer and choreographer. Since she is also “interested in merging Dance with technology through films and documentaries, as well as performances with live feed video projections,” she will present her research findings not only in paper format at the URCAA Symposium in fall 2007, but she also plans to make a short documentary of the interview footage she is now taking. She and fellow dancer Nicole Byrne have already created a website—Multidimensional Movement Concepts—”as a form of communication to those interested in traveling for the arts.”

“There is so much to discover within the field of Dance,” Aline says. “I am interested in administration, choreography, and historical research,” all of which she’ll study in graduate school. However, after graduation in the spring, Aline will pursue her onstage performing career, which, unfortunately, is short for dancers.

She tries to seize every performance opportunity. As a member of FSU’s Dance Repertory Theater, she performs for the community throughout the year and is part of the annual concert in the Nancy Smith Fichter Theater. She says, “Being in the company has truly changed me as a dancer. We are treated like professionals, which is great preparation for the future.”