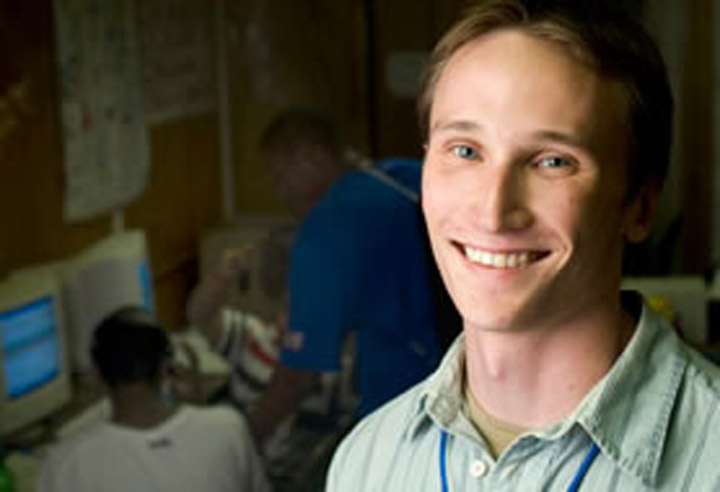 “Studying International Affairs and being involved with the International Center familiarize me with foreign cultures, so that I can be an educated ambassador of my own country, and ultimately bridge cultural gaps and unite people.”

International understanding and cooperation—what the world needs now, and what Blake Draper, an Honors student who is majoring in both International Affairs and Religion, is working toward.

Blake began his foray into foreign cultures by traveling to Costa Rica with the Beyond Borders International Cultural Exchange in the summer 2006. There, he experienced what international students must go through upon arrival in the U.S.—the same cultural adjustment. He uses that knowledge now as he interns for the Beyond Borders program, and as a peer mentor for the International Center. In this position, he assisted in welcoming students to Florida State and helping them adjust to life in America. “We host social events on campus, particularly during Seminole Sensation Week, and at community festivals throughout the year.” They also teach what most of us take for granted—where to buy groceries, how to get utilities hooked up—and provide transportation to obtain driver’s licenses and social security cards. He says, “International students are interesting folks with interesting stories.”

A superb student (3.9 GPA), whose mother is an elementary school teacher, Blake believes in passing on knowledge. For the past two years, he’s served as a mentor coordinator for America Reads. At Griffin Heights, located in a low-income housing community, Blake supports the children’s learning—from fixing computers to helping them with homework. He says, “I feel passionate about helping them do well in school and in life. I’m a middle-class college kid with many opportunities. I feel a duty to give back to the society that has been good to me. The kids I work with don’t exactly fit that mold, and I like to think the mentors I supervise, and I, are providing them with some opportunities.”

His future plans are uncertain. Perhaps he’ll attend law school, specializing in International Law. Perhaps he’ll work for the Peace Corps, or apply for a Fulbright Teaching Assistantship. Whatever he chooses, we know it will be for the betterment of all.