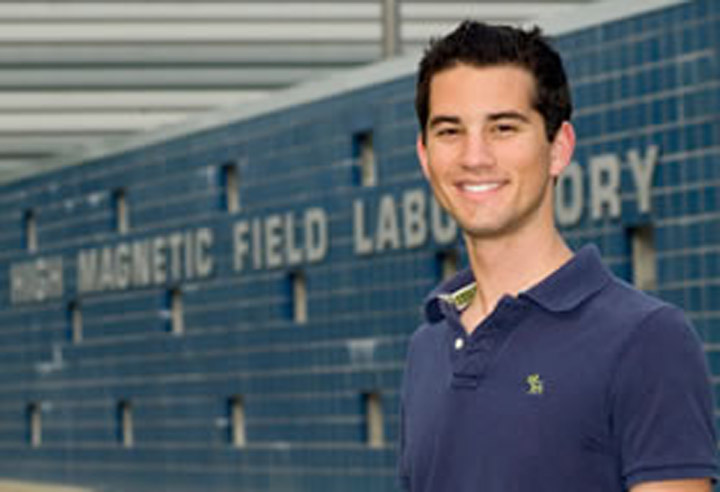 One of the most common genetic disorders, affecting 1 in 500-1000 people worldwide, is Polycystic Kidney Disease (PKD), caused in part by mutations in the gene that codes for Polycystin-1 (PC-1). This gene may contain the Polycystin-1/Lipoxygenase/Alpha-toxin (PLAT) domain, found in a number of proteins throughout the plant and animal kingdom.

Benjamin Katz, who recently received the Undergraduate Research and Creative Activity Award, will use the monies attached to the award to perform research on the PLAT domain, under the guidance of Biological Science Professor Betty Gaffney. Ben says, “The cost of the supplies adds up. Certain reagents can cost $1,000!”

Since the structure and function of the PLAT domain in the PC-1 gene are unknown, project members will focus on determining the structure of this domain, using Electron Paramagnetic Resonance (EPR). Since PC-1 is a membrane-bound protein, they will then explore the hypothesis that PLAT domains may also be involved in protein interactions. Ben says, “All of this will hopefully aid in our understanding of how PC-1 works and how it is involved in PKD.”

As a Biology major, carrying a minor in Chemistry, Ben finds working with Dr. Gaffney a rewarding experience. “She provides me with knowledge and insight into the world of science and pushes me to think deeply about the subject matter.”

Medical school is in his future, as it involves two things he enjoys most—science and people. But his path to medicine was not a direct one. “I thought I wanted to be a powerbroker on Wall Street. A summer job in a cardiology office sparked my interest in science. I took General Biology I and was amazed. I had never been that excited about a class.”

And the enjoyment of people? Ben says, “I knew I wanted to learn the stuff and to have fun with my friends, so I study by telling my friends about the subject matter. The looks they give me are hilarious. In the cardiologist’s office, I interacted with a lot of patients. They have so many interesting stories and beliefs. It was fun to be able to talk about anything, but, because of the medical atmosphere, always be able to include science in some form.

“But what excites me the most in medicine—there is still so much to discover!”