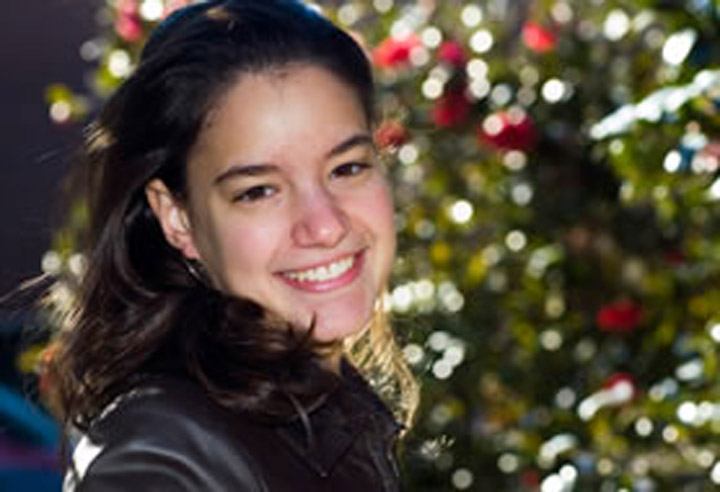 “Learning that women's status around the world, including in the U.S., is much lower than men's has made me deeply passionate about achieving equality for women.”

Born and raised in Caracas, Venezuela, Gabriella Beyer and her mother moved to the U.S. to escape political and economic uncertainty. Only 14 years old, the transition was not easy—her father and siblings remained in Venezuela; the food was unfamiliar, as were the long school hours. Yet, they persevered and are now glad they did. Gabriella explains, “I love my country and plan to visit often, but the U.S. has become my home.”

Everyone in Gabriella’s childhood home spoke English. She then learned Spanish in school, practicing the language with her extended family. But after a year in the U.S., she became interested in learning more. Perhaps the transition had awakened a latent desire—she discovered she “loved different cultures, traveling, and languages.” She began to study French, which, like Spanish, is a romance language. As an exchange student in France, she quickly picked it up. “I realized I have the ability to learn languages easily.” She’s now begun studying a fourth—Mandarin Chinese—which she hopes to master by the time she obtains her doctorate.

To feed her interest is other cultures, Gabriella joined the ‘Noles Leadership Book Club, an organization run by the Lead Center. While reading books on the subject of leadership, she can interact with students of different backgrounds and with faculty and staff “who have a daily impact on the FSU community.” To introduce her own culture to others, Gabriella serves as the press and advertisement chair of the Hispanic/Latino Student Union.

If you love cultures, a major in International Affairs is for you. For Gabriella, “international politics is simply one step further.” The cultural issues of women, similar in many ways worldwide, “amazed” her, so much so that she chose Women’s Studies as a second major. “Learning that women’s status around the world, including in the U.S., is much lower than men’s has made me deeply passionate about achieving equality for women. I proudly consider myself a feminist.”

Yet, to achieve equality, she says, “We must start with policy making.” To prepare, Gabriella plans to attain a doctorate in Women’s Studies and teach at the university level. Later, she will enter politics, lobbying for women’s issues.

For a young woman who has learned not only to survive but to flourish through the changes that life brings, such accomplishments are definitely doable.