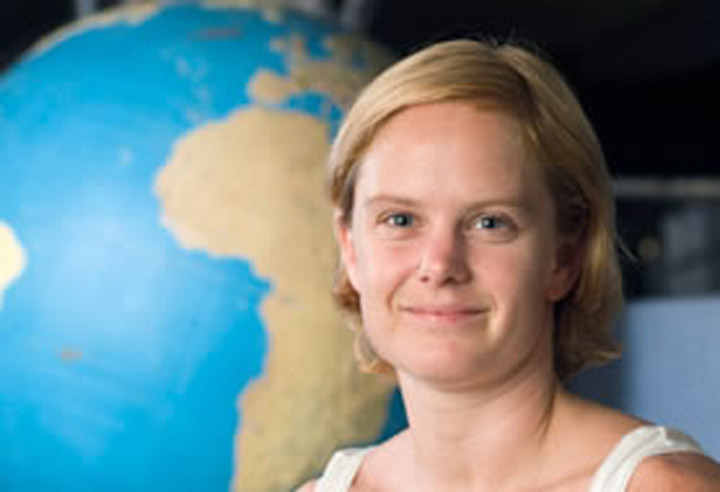 Because of a rapid warming trend over the past 30 years, the Earth is now reaching the warmest levels seen in the last 12,000 years. A study led by scientists at NASA’s Goddard Institute for Space Studies concludes, “We are getting close to dangerous levels of human-made pollution.”

That’s why the research performed by Cathrine Sandal, a doctoral candidate in Physical Oceanography, is so important. Physical Oceanographers study, among other things, ocean properties and the ocean-atmosphere relationship that influences weather and climate. Dr. William Dewar, chair of FSU’s Oceanography department, says Cathrine has performed the first laboratory experiments relevant to paleoclimate studies. The study of past climates helps scientists understand the evolution of the Earth’s atmosphere and oceans, and it helps them quantify the properties of the Earth’s climate, including the forces that drive climate change and the sensitivity of the Earth’s climate to such force.

Cathrine’s research focuses on the influence of the Bering Strait (the narrow and shallow strait that connects the Pacific ocean to the Arctic ocean) on the climate of the North Atlantic. She explains, “Approximately 10,000 years before present, sea level rise opened the Bering Strait for through flow of water. At the same time, oceanic and atmospheric temperatures rose abruptly on Greenland, as seen in the paleo record. Our theory is that these two occurrences are connected, such that the opening of the Bering Strait initiated the rise in temperature.”

Using a analytical model, she is recreating “the transition from the Last Glacial Maximum to the beginning of the Holocene, which includes the dramatic increase in temperature. With a laboratory model, she is “looking at the temporary damming effect of ice as it flows through a narrow and shallow strait.” For instance, the Bering Strait.

With her doctorate in hand, she’ll go on to Norway’s Bjerknes Centre for Climate Research, to investigate the influence of the North Atlantic on the climate of the Northern Hemisphere.