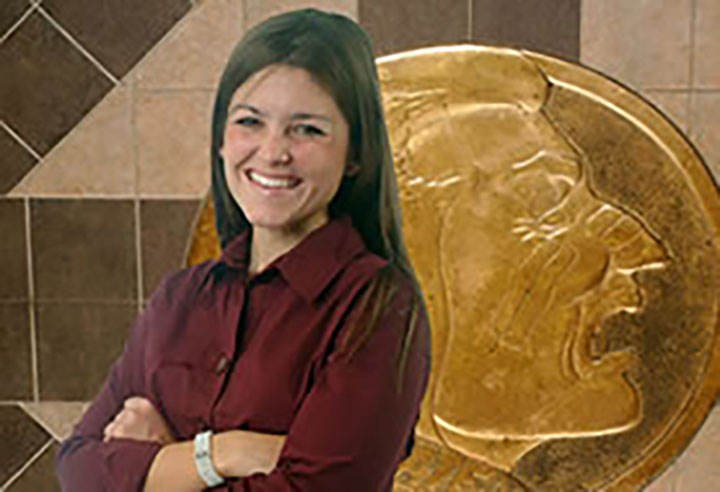 “Kristin plans to put her knowledge and well-honed leadership abilities to work in third world countries, through the U.S. Agency for International Development, the Peace Corps, or through anthropological studies.”

Kristin Macak didn’t want to attend Florida State. Her parents were FSU alumni, but she was determined to attend school on the West Coast. Then she arrived on campus. “I realized that FSU has been pumping through my veins since the day of my birth.”

Her first move was to the ninth floor of Kellum Hall, to become part of the Genesis Living Learning Community. The Genesis Leadership Program provides classroom training in leadership theory and hands-on experiences through service projects and community involvement. She was awarded the Genesis Unsung Hero Award, and joined the government of Kellum Hall.

In 2004, as an Orientation Leader and as part of UPLink (University Peer Link to Incoming Freshman), she helped introduce the University to new students. As a justice for the Student Judicial Board, which she continues to serve on, Kristin affords her fellow students the chance for a peer review.

By this time she had become a “Seminole through and through.” So, she understood the allure of Homecoming, when alumni, including her parents, return to campus. First, she served as overall assistant for Homecoming. Last year, she served as coordinator of the festivities. She also joined the Student Alumni Association. Then, she became an RA (resident assistant) in Jennie Murphree Hall, where she lives and works today.

At some point in college, many students undergo a life-changing experience. For Kristin it was during Dr. Kevin Vaccarella’s class, Introduction to the New Testament. “He taught me to challenge what I am told, to find my own truth.”

Kristin plans to put her knowledge and well-honed leadership abilities to work in third world countries, through the U.S. Agency for International Development, the Peace Corps, or through anthropological studies. As she says, “The world awaits.”