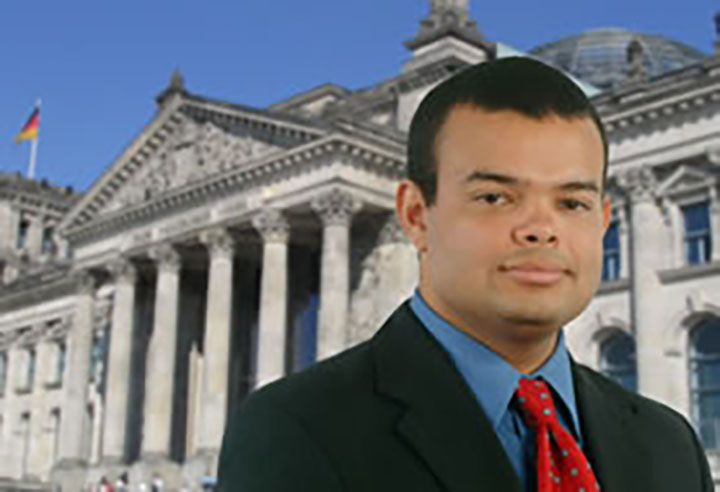 “Guillermo wisely partakes of every opportunity the University has to offer.”

Maritime law, which deals with territorial and international waters and the industries of those waters, is Guillermo Cancio’s intended career. To prepare, he is wisely partaking of every opportunity.

Since his freshman year, for every semester but one, Guillermo has interned at the Florida Legislature, and he now works for State Senator Ron Klein. In 2004, he spent three weeks in Dresden, Germany through the Beyond Borders International Cultural Exchange Program. He, of course, studied German during his stay. Upon his return, he founded FSU’s German Club, and now serves as its treasurer.

His interest in Venezuelan politics and history led him to an internship at that country’s embassy in Berlin. He then added a minor in Spanish to his course load, which, even with all of his activities, has always been a minimum of 15 credit hours per semester. He currently serves as an Executive Board member of the Cuban-American Student Association.

The College of Social Science’s World Affairs Program, which affords students opportunities to study and competitively debate internationally relevant issues, has enabled Guillermo to become involved in the Model United Nations (UN) Conference simulations. His team took the first place prize at the University of Pennsylvania Model UN Conference in Philadelphia, and earlier this year he represented Florida State at the Catalunya Model UN Conference in Barcelona, serving as committee chair for the newly created Human Rights Council.

Even the honor societies Guillermo has been inducted into further his political science and foreign language education—Phi Sigma Iota, the International Foreign Language Honor Society, and Pi Sigma Alpha, the National Political Science Honor Society. He recently received the Chevalier Degree within the Order of DeMolay, an organization dedicated to developing its members’ civic awareness and leadership skills. Guillermo now serves as the president of the J. Edwin Larson Chapter of Florida’s Order of DeMolay.

The Office of National Fellowship announced recently that Guillermo was a recipient of the University Research and Creative Activity Award. The award will enable him to carry out a research project of his own design, as it includes $4000 with which to accomplish the project. Guillermo, we’re certain, will take full advantage of this opportunity.