But as newcomers to campus explore the university’s 1,400 acres this summer, they may discover another cherished symbol that’s been around for more than a century.

In the spring of 1901, when the school was still named West Florida Seminary and also known as the Seminary West of the Suwannee, the owl made its first appearance on campus when students included the symbol in their yearbook at the time, “The Argo.”

University Archivist Sandra Varry, who leads FSU’s Heritage Protocol and University Archives, has pored over reams of historical documents dating back to the school’s creation in 1851. In the fall of 1901, West Florida Seminary became Florida State College, a four-year institution with four departments.

“I feel pretty strongly that the owl makes its first appearance in 1901 in ‘The Argo,’” Varry said. “But the symbol was not used in the seal then.”

The official seal of Florida State College in 1901 was simple: it included two torches, the school’s name and birth year. In 1903, the owl joined the seal for the first time perched atop the two torches. It didn’t stay long. By 1905 the Florida Legislature reorganized the state’s higher education system, Florida State College became Florida Female College and the owl disappeared from the seal.

But the symbol, representing knowledge and wisdom, has remained an important part of the institution ever since. The owl has continued to appear in student publications, names of academic and philanthropic clubs, and as architectural accents around campus.

An intricately fashioned stonework owl was included in the construction of Eppes Hall, originally called the Education Building, in 1918. The bird sits proudly on a sculpted book over the main entrance of the building, overlooking Westcott Plaza.

Eppes Hall, now home to the College of Criminology and Criminal Justice, has housed a variety of colleges and departments over the past century, including the Department of Psychology. That’s why the new Psychology Building, built in 2008, displays a copy of the Eppes stonework owl. The casting was produced by Florida State’s Master Craftsman Group and installed over the portico of the building’s courtyard.

In a nod to the longstanding significance of the symbol, more owls landed on campus during the renovation of Ruby Diamond Concert Hall completed in 2010. Two ornate, hand-carved owls were added to the stairway railings at the entrance of the Westcott Building. Inside the hall, an oversized owl with a six-foot wingspan towers over the 1,260-seat concert space.

The Ruby Diamond owl was created by Master Craftsman Chris Horne. The original concept called for carved wood, but that idea proved unworkable since the colossal owl would weigh too much. So, Horne designed the sculpture by combining a series of studio processes that reduced the weight and still looked like carved wood.

He used lightweight balsa wood for the wings, foam for the body, resin for feathers and the beak, and acrylics for the eyes. He airbrushed the owl with painted wood tones to look like carved wood.

“The idea was to create a large-scale great horned owl suspended above the audience that appeared to be carved from mahogany,” Horne said. “I had the opportunity to apply a multitude of skills and new processes, including fiberglass molds and epoxy.

“It took me three to four months to complete the owl. It was an exciting opportunity to create a permanent installation for FSU. I’ve worked on many commissions since then, but this job was one of my personal favorites.”

The Master Craftsman Studio has also produced glass etchings of owls for the front doors of the Westcott Building, as well as black granite plaques at the base of three flagpoles. The monument represents West Florida Seminary, Florida State College and Florida State College for Women, which existed from 1905 to 1947. 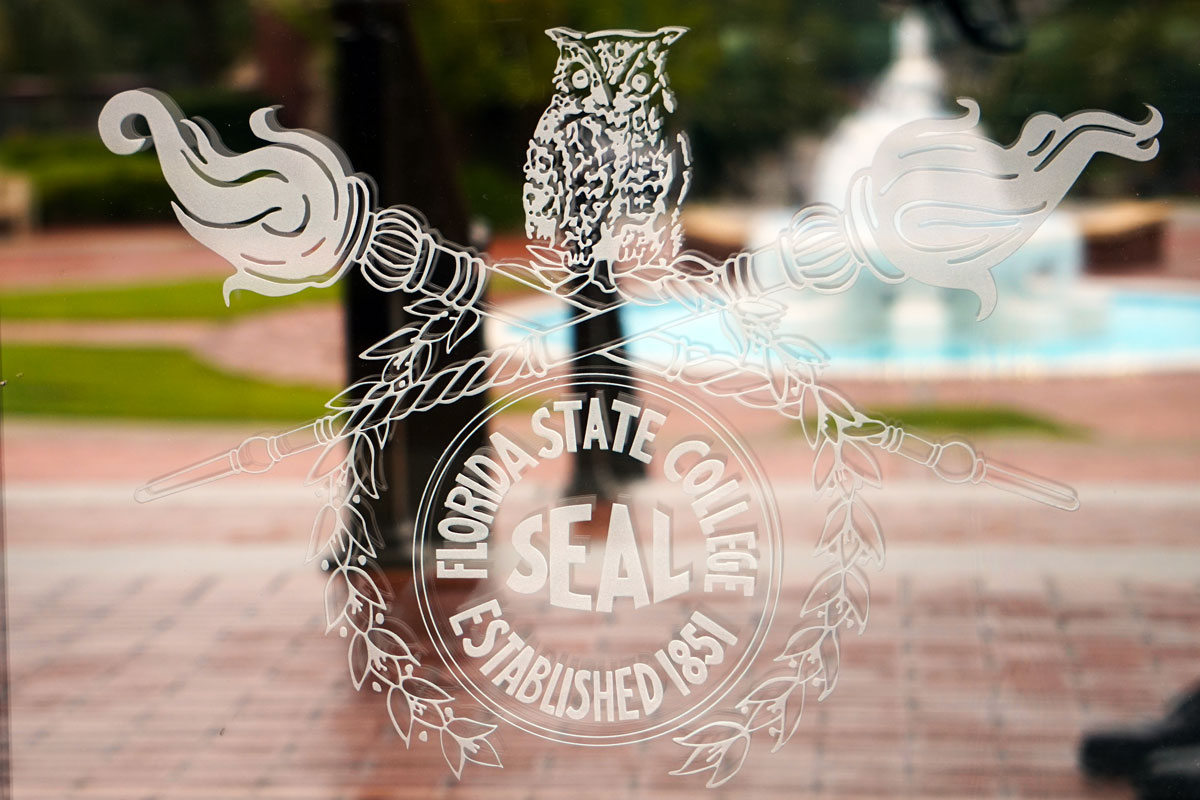 As FSU’s archivist, Varry often receives historical records from families and academic departments, and she thinks materials could still show up and shed new light on FSU’s long, cherished tradition with owls.

“There could be some magic that happens and we find some previously undiscovered seminary documents,” Varry said. “I think the owl was an important symbol and it’s managed to stay with us, which is wonderful.”