The 5 Browns — a classical piano ensemble of five siblings — will perform on Moore’s rare Steinways at the first-of-its-kind, free concert at 7:30 p.m. Thursday, Sept. 1. While the concert is free, tickets must be reserved beginning Wednesday, Aug. 3, at tickets.fsu.edu or through the FSU Fine Arts Ticket Office by phone at (850) 644-6500.

“These pianos have never been played in one place in their history, and the first time a concert will be performed with them will be at Florida State,” Moore said. “I think it is incredible that FSU will be the first one to have this amazing collection of pianos performed upon at one time.”

Steinway & Sons, founded in 1853 and considered the world’s premier piano manufacturer, is co-sponsoring the concert and underwriting The 5 Browns’ appearance.

“Everyone at Steinway & Sons is excited to witness history on Sept. 1 as our talented Steinway Artists The 5 Browns perform upon five of the very unique Steinway pianos provided for this event by DeVoe Moore,” said Ron Losby, president of Steinway & Sons – Americas. “DeVoe’s collection of eight Steinway Art Case pianos, all with historical significance, is the largest such collection in the world — and seven of these pianos will be on hand for this momentous occasion.” 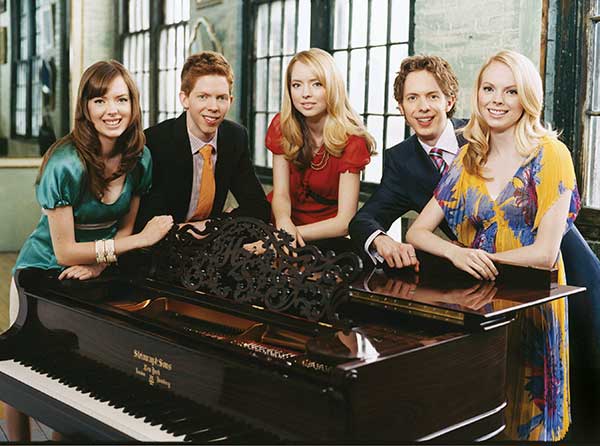 The 5 Browns — Ryan, Melody, Gregory, Deondra and Desirae — are the first family of five siblings to have attended New York’s Juilliard School. The quintet has three CDs that have climbed to No. 1 on the Billboard Magazine’s Classical Album Chart. The program will include selections by Wolfgang Amadeus Mozart, George Gershwin and Robert Schumann.

“We are thrilled and honored to host this unique event at Ruby Diamond Concert Hall that will enable DeVoe and Shirley Moore to share their treasured Steinway collection with the campus and Tallahassee community,” said President John Thrasher. “The superb craftsmanship of Steinway pianos is internationally known, and we truly appreciate the company’s generosity to make this idea come to fruition.”

Moore’s collection of eight Steinways is the finest private collection in the world and is housed at the Tallahassee Automobile Museum, which he established in 1996.

“When you’re a company with 163 years of history, there’s not many things that you can call ‘the first’ or ‘the best,’ however, I believe it’s safe to say that this is the most significant collection of Steinway pianos to ever be involved in a single piano performance,” Losby said.

In addition to the five Steinways to be played by The 5 Browns, two others in Moore’s collection will be on display in the lobby of Ruby Diamond Concert Hall during the event.

Moore bought his first Steinway, the Alma-Tadema replica, in 2006.

“The craftsmanship they put into that piano was incredible, and I bought the first one because I was struck with the beauty of it,” Moore said.

The Steinways that will be featured in the concert are: