Florida State University alumnae Wendy Clark, Maura Hayes, Nancy McKay and Nada Usina were recognized May 4 as FSU Women of Distinction during An Evening to Celebrate in New York City.

The event, sponsored by the FSU Alumni Association, The Women for FSU and the Seminole Club of New York City, included the inaugural presentation of The Inspire Award and a panel discussion featuring the four winners.

Named “one of the most important women in marketing” by Advertising Age, Wendy Clark (B.A. ’91) led Coca-Cola’s advertising as president of Sparkling Brands & Strategic Marketing before joining DDB North America, one of the largest ad agencies in the world, as chief executive officer in January 2016. Clark’s achievements have been recognized by New York Women in Communications, Advertising Women of New York and Fortune. In 2007, she was inducted into the American Advertising Federation’s Advertising Hall of Achievement.

Maura Hayes (B.S. ’82) has led a 35-year career with The Walt Disney Company, beginning as a performer at Walt Disney World, where she danced and sang in Walt Disney’s favorite show “The Diamond Horseshoe” and was lead stuntwoman in the “Indiana Jones Stunt Spectacular” during its opening year. While at Disney World, Hayes transitioned into the film and television department, managing teams for press events in Disneyland Paris and the Animal Kingdom Park in Florida. When Disney had the vision to build a new production studio, Hayes was asked to transfer to NYC to work on the project, leading to her current role as director of operations for The Walt Disney Company’s Times Square Studios. 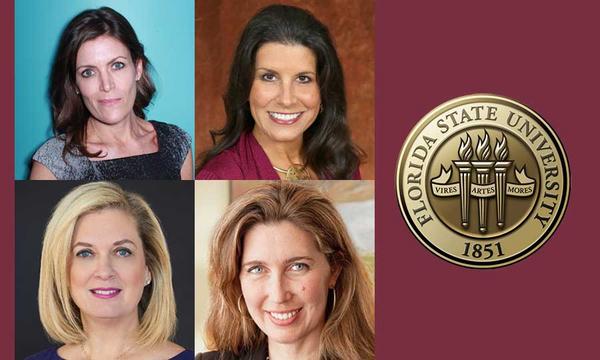 Florida State University alumnae Wendy Clark, Maura Hayes, Nancy McKay and Nada Usina were recognized as FSU Women of Distinction during An Evening to Celebrate May 4 in New York City.

A 25-year beauty industry veteran, Nancy McKay (B.S. ’78) is the chief executive officer of NEST Fragrances, a boutique luxury fragrance company, and previously served as general manager and senior vice president of the Estee Lauder brand, Tom Ford Beauty & AERIN Beauty for North America at The Estee Lauder Companies, Inc. A firm believer in giving back, McKay was involved for many years in The Estee Lauder Companies’ fundraising efforts for the Breast Cancer Research Foundation, where she led teams that worked together to generate more than $1 million through the sale of its iconic pink ribbon products.

Nada Usina (B.S. ’93, M.S. ’94) is a member of the CEO/Board Services Practice and leads the Technology Sector for Russell Reynolds Associates across the Americas, where her clients range from Fortune 500 to leading media, entertainment, consumer and technology brands to venture capital and private equity-backed companies. Usina also co-leads the firm’s global Digital Convergence and Mobile Practice as well as the firm’s global Media, Entertainment & Sports Practice.

The Inspire Award was created by the FSU Alumni Association to honor alumnae who have made significant achievements in their careers and communities, earning them recognition as FSU Women of Distinction.

“These alumnae have distinguished themselves as leaders within their industries, and their hard work and determination is both an inspiration and a testament to the values of Florida State University,” said Scott Atwell, FSU Alumni Association’s President/CEO. “We are extremely proud to honor their achievements and recognize them as FSU Women of Distinction.”