A total of 150 nominations were received from departments and divisions across campus — a 100 percent increase from the nominations received for last year’s award.

Florida State University presents five different awards to student employees. Each award is named after an aspect of the institutional seal or in honor of an exemplary alumnus and student employee:

DiBenedetto, the overall winner award’s namesake, credits much of his growth and development to the skills he learned from supervisors during his time as an FSU student employee. Now chairman and CEO of Tribridge, DiBenedetto serves as the keynote speaker at the Student Employee of the Year award ceremony.

The 2016 Student Employee of the Year overall winner Margaret Scheiner is a graduate student in the Department of Industrial and Manufacturing Engineering. 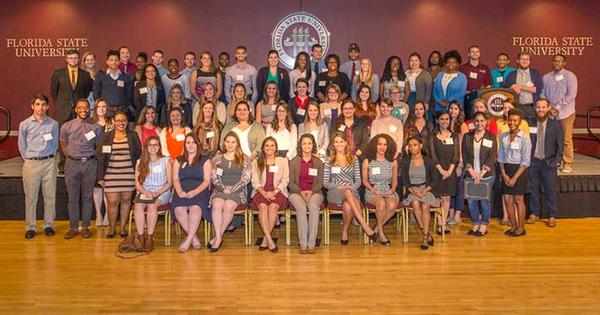 2016 Student Employee of the Year student nominees in attendance at the award ceremony.

The ceremony recognizes that the university could not accomplish initiatives or create a welcoming atmosphere to all without students’ daily contributions. For more information on Career Center services, programming or initiatives, visit http://career.fsu.edu/.