During a university-wide Department Chairs and Deans Meeting Oct. 15, Florida State President Eric J. Barron gave a “pre-eminence” update on the university’s metrics-driven Path to the Top 25 initiative and the focus on job creation and student career success.

“In terms of the quality of the students we’re bringing in, we’re really a top 25 university already,” Barron said.

Barron reviewed numerous U.S. News & World Report metrics indicating where Florida State was already in “top 25” territory, such as its nationally ranked No. 4 graduation rate performance. He also discussed where the university is in striking distance and where the university has the most work to accomplish, such as in the strategic hiring of faculty to improve student/teacher ratios.

“The No. 25 institution has a faculty/student ratio of 18:1. To reach that ratio, we would have to add 620 faculty to this university,” Barron said. “We understand where our weaknesses are. It’s not the students we attract. It’s not what we do with the students. It’s really the size of the faculty as it matches up to the size of our student population.

“Literally, the only thing standing between us and a top 25 ranking is money,” he said. “Adding faculty will make the metrics move.”

•Creating a culture of entrepreneurship, including making it easier for entrepreneurs to do business on campus.

•Investing in innovation, including a focus on areas with the greatest potential for long-term demand: materials, energy, successful aging and coastal marine sciences.

•Participating in regional and statewide economic development, such as helping to transform Tallahassee’s economy through Collegetown, a convention hotel near the Donald L. Tucker Civic Center and the so-called Madison Mile between the civic center and Doak Campbell Stadium.

“Now you know exactly what I’m telling the governor, the Legislature, the Board of Governors and our trustees,” Barron said.

Roughly 175 senior level academic administrators took part in the meeting, which also included an update on the university’s upcoming reaccreditation through the Southern Association of Colleges and Schools.

“In addition to giving the president and provost a chance to talk about their vision for the future and the kinds of work we need to do to help bring that to fruition,this was a chance to bring our new and continuing chairs and deans up to speed on the most current issues with which they need to be engaged,” said Sally McRorie, vice president for Faculty Development and Advancement.

Stephen McDowell, the John H. Phipps Professor of Communication and associate dean of academic affairs in the College of Communication and Information, expressed appreciation for the opportunity to hear about the university’s top priorities and projects from senior administrators.

“We had a good presentation on the budget and also on the upcoming Southern Association of Colleges and Schools review to give us a good sense of where we are on those issues and what our role will be in the future,” McDowell said.

Jeffrey Kahn of the College of Law echoed McDowell’s sentiments.

“The meeting was useful for me in a sense of getting a lot more information about what the main university is paying attention to,” said Kahn, the Charles W. Ehrhardt Professor and associate dean for academic affairs in the College of Law. 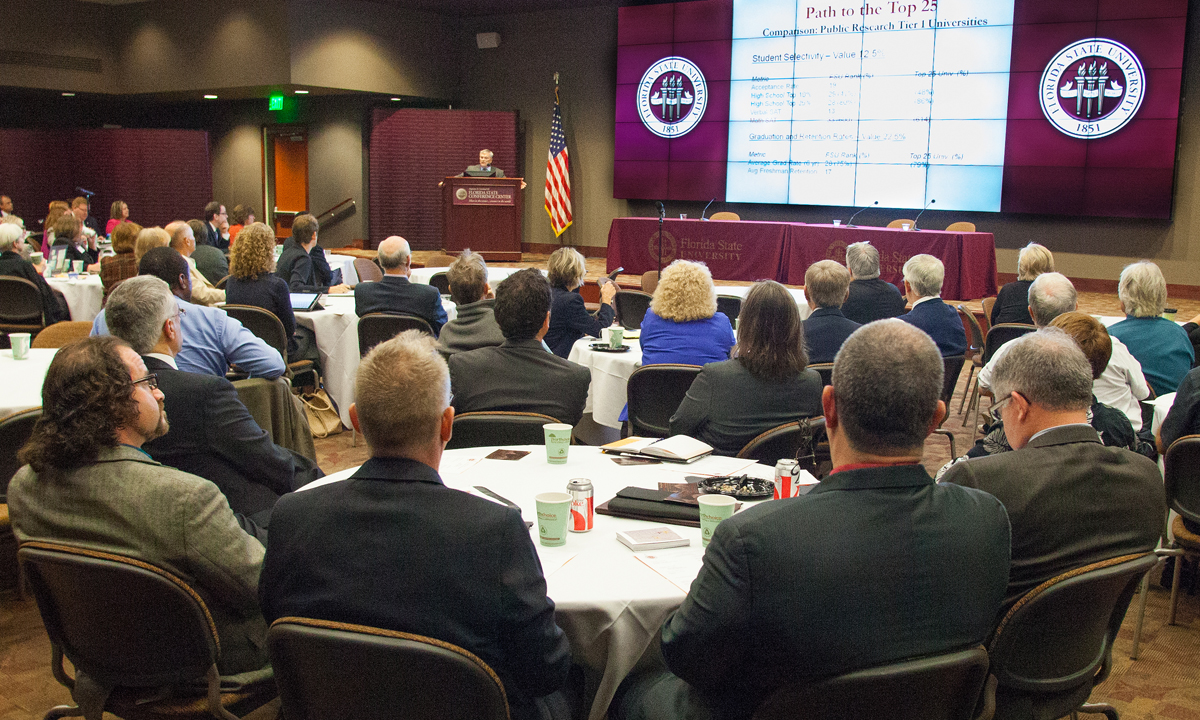