Walking out of the latest “Top Gun” movie, you might remember the iconic catchphrase, “I feel the need for speed.” Tom Cruise made the phrase famous in the original 1986 movie, but in real life, it’s scientists and engineers who are pushing the limits of aerodynamics.

Take it from Rajan Kumar, director of the Florida Center for Advanced Aero-Propulsion (FCAAP) and associate professor in mechanical engineering at the FAMU-FSU College of Engineering. FCAAP is a research institution devoted to the needs of the highly competitive aerospace industry.

“We experimentally simulate very similar conditions to those seen in ‘Top Gun,’” Kumar said. “However, the simulations in the movie are purely from an artistic point of view. What we do here is simulate real flight conditions in a high-speed wind tunnel.”

Florida is a major hub for aerospace and aviation activity, with nearly 106,000 Floridians working in those industries. The Florida Legislature established FCAAP after the federal government terminated the Space Shuttle program. Lawmakers charged the center with developing cutting-edge technology in aerospace and aviation while also building a new generation of scientists and engineers.

The center’s 60,000-square-foot space boasts several wind tunnels that allow for aerodynamic and aeroacoustic studies as well as a hot jet facility, which produces high-temperature, high-speed airflow that simulates the exhaust from a jet engine. The crown jewel of the facility, however, is a polysonic wind tunnel that allows researchers to run tests up to Mach 5, which is equivalent to about 3,800 miles per hour.

Kumar and other researchers use the wind tunnel and other tools at the facility to study things that move very fast — like rockets and projectiles — and the resulting hypersonic flow that can’t be seen with the naked eye. The center partners with the FAMU-FSU College of Engineering as a training facility so students get real-world experience in a high-tech engineering laboratory.

“We are supporting a number of national programs which involve high-speed flow,” Kumar said. “Everything from hypersonic, supersonic or transonic. We have a unique polysonic wind tunnel facility here that provides testing capabilities like nowhere else in the world.” 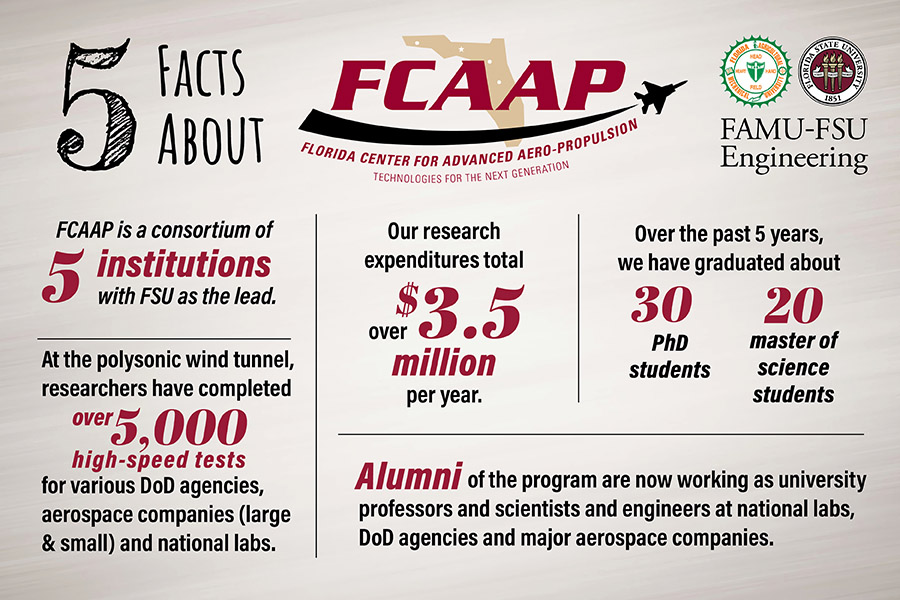 These partnerships have led recruiters straight to FCAAP when companies are looking for the next generation of engineers.

Freeman Mason, a doctoral student advised by Kumar, worked on one of the Air Force projects associated with FCAAP and has a job waiting for him at AFRL at Eglin wh

en he graduates this summer. Andrew Baldwin, a former student of Kumar’s, also went to work for the Air Force on the only big hypersonic wind tunnel in the nation.

“Our students are in demand because of the training they are getting here,” Kumar said.

Students and faculty are keenly aware of the real-life application of this research.

One of the projects FCAAP faculty members and students are working on, for example, involves “safe payload separation” at supersonic speed. In an area where there is conflict, supplies and rescue packages may need to be dropped quickly so that the pilot can make a safe and swift exit. It is challenging to make that drop at a high speed without it hitting the aircraft and potentially causing damage to either the aircraft or the package.

“The projects being carried out have strong relevance to DoD missions,” Kumar said.

Here’s a sampling of other research activity at FCAAP: