With more countries looking for renewable energy resources, scientists across the globe are working to make more efficient solar cells to help build everything from better solar panels for buildings to better flashlights to wearable tech.

Assistant Professor of Chemistry Kenneth Hanson, along with graduate students Tristan Dilbeck and Sean Hill, has developed a self-assembled trilayer solar cell containing two types of dyes that combine to increase the amount of low energy light it can absorb and convert to electricity.

Their efforts were recently highlighted in a special Emerging Investigators issue of Journal of Materials Chemistry A. The article was also ranked as “Hot” by reviewers and editors of the journal.

The current maximum possible efficiency for a standard solar cell is about 33 percent, and commercially available solar panels are typically in the range of about 14 to 16 percent. The cell structure that Hanson and his team have produced pushes the theoretical limits to more than 43 percent efficiency.

Though solar cells have grown in popularity, they are not widely used by the general public due to their high cost and low efficiency.

Still, the market for solar cells has grown considerably over the last decade, and with more interest in clean energy options, more resources will likely be devoted to solar cell technology. A Department of Energy study in 2012 estimated that solar energy would supply about 14 percent of the U.S. electricity demand by 2030 and 27 percent by 2050. 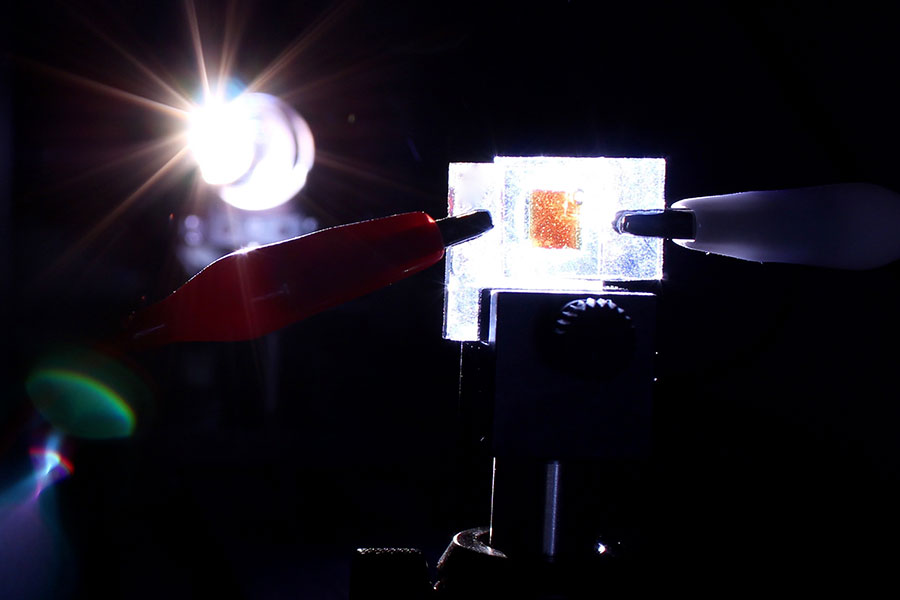 What’s largely been tamping down solar cell efficiency numbers is the inability of a cell to harness and convert low energy light. Photon upconversion — combining low energy light to generate hire energy states — is a means of breaking this barrier and pushing the limits to about 43 percent. But it is difficult to achieve under low light.

Hanson and his team took the approach of using a three-layer architecture — an acceptor molecule and two sensitizer molecules.

Once assembled, these molecules worked cooperatively to perform photon upconversion.

“Typically, efficient upconversion is achieved by hitting a sample with either high intensity laser light or focused sunlight using a magnifying glass,” Hanson said. “To harness upconversion in solar cells, we must make it efficient under low intensity sunlight. With our new trilayer devices, we have achieved that goal.”

To test solar cell efficiencies, Hanson, as well as other researcher around the world, used a standard light source calibrated to what scientists call “one sun.” Because scientists cannot always count on sunny weather or the ability to bring samples outside, they use a light that has a filter to take into account the effects of the atmosphere (i.e. carbon dioxide, humidity, etc.) as well as how much light actually shines from the sun. The energy from one sun is set to 100 miliwatts per centimeter squared.

The next step is to increase the photocurrent and overall power conversion efficiency of the cell, Hanson said.

Hanson is part of the Energy and Materials Strategic Initiative, which has a mission to produce high-tech materials for next generation, energy sustainable technology. Members of the initiative are working on a variety of high-tech materials including solar cells, light-emitting diodes and photoactive molecules.