A Florida State student and two recent graduates are among the 400 young scientists worldwide who were selected to attend the 66th Lindau Nobel Laureate Meeting, a gathering of 29 Nobel laureates in physics to discuss the latest innovations and issues in science.

Tiara Diamond, Brittany Fuzia and Patricia Martin are among the young scientists who are in Germany to share ideas and hear from some of the most profound physics researchers in the world. The weeklong conference concludes July 1.

“Learning directly from the Nobel laureates will be an enriching experience, but the students will also get to know their peers from all around the world, the people who will be the next generation of outstanding scientists,” said Assistant Professor of physics Kevin Huffenberger, who also is Fuzia’s adviser.

Attending the meeting is a prestigious honor for students and young scientists. Once every year, Nobel laureates meet in Lindau, Germany, to help mold the next generation of scientists. The meetings focus alternately on physiology, medicine and physics. Additionally, a meeting for economics is held every three years. 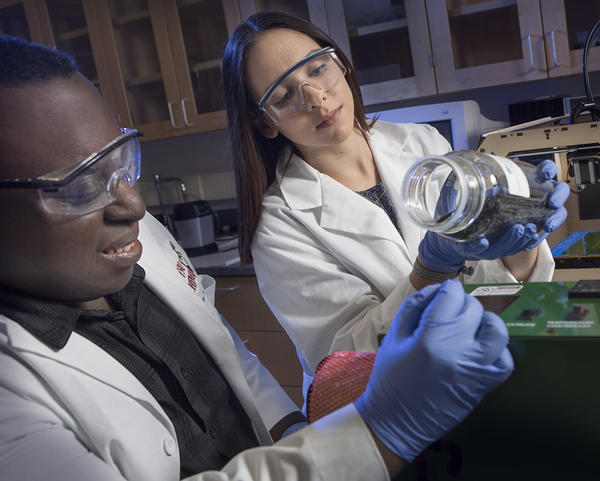 Martin, who is from Miami, graduated this spring with an undergraduate degree in biology with minors in chemistry and psychology. Fuzia, a New York native, is currently pursuing her doctorate in astrophysics at Florida State. Diamond, an Illinois native, graduated from FSU with her doctorate in physics last spring.

All three are launching careers in the sciences.

Diamond, who is now working at Goddard Space Flight Center as a postdoctoral researcher, is studying type 1A supernovae, which are stars even larger than the sun that often explode at the end of their lives. Fuzia’s research deals with cosmology and the big picture of the evolution of the universe. And Martin has been working on two research projects: one looks at the integration of carbon nanotubes into thin-film batteries and the other is on creating advanced filaments for 3D printing.

All three said they were excited about the opportunity to exchange ideas with Nobel laureates in the field.

Martin is eager to meet the most recent Nobel Laureate of physics, Arthur McDonald, who won the award for his work on the small particles called neutrinos. Fuzia and Diamond are most excited to meet Nobel laureates Brian Schmidt and George Smoot. Schmidt won the Nobel Prize in 2011 for the discovery that the universe is expanding at an accelerating rate, and Smoot won in 2006 for measurements of the cosmic microwave background.

“Since McDonald is the most recent Nobel laureate, it will be interesting to hear his thoughts on how being awarded such a prestigious award has affected his life and how he has been adjusting to the fame,” Martin said.